Man’s interference in the marine environment presents challenges for our species, and those that live in it. 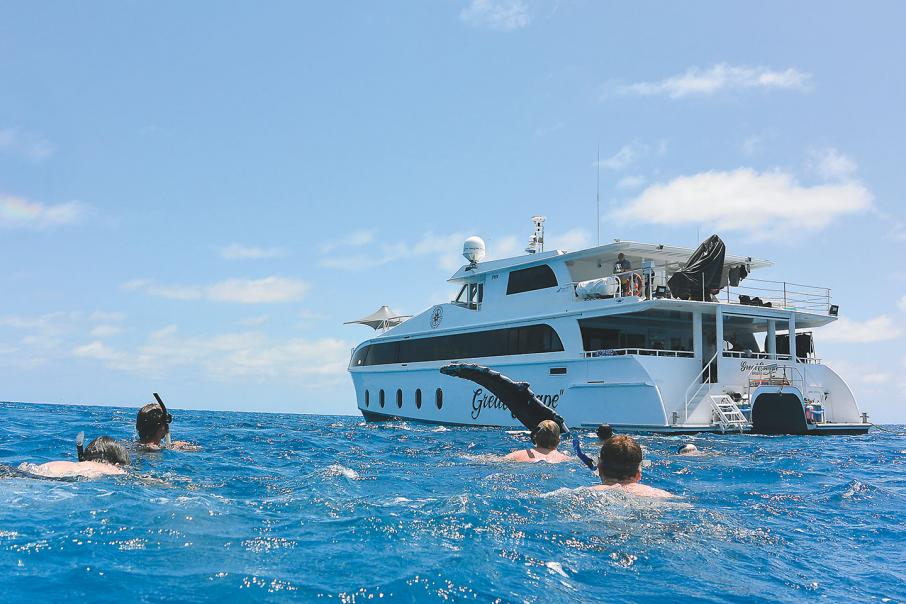 Man’s interference in the marine environment presents challenges for our species, and those that live in it.

I had a remarkable experience last month. At short notice I was offered a place on a diving trip to the Rowley Shoals on board Great Escape, a very fancy catamaran based in Broome, which mainly works the Kimberley coast.

Not only did I get to reacquaint myself with the intricacies of scuba diving in conditions and accommodation that could only be described as perfect, I also had the good fortune to swim with the whales that approached the boat while moored in the lagoon off one of the atolls, about 250 kilometres west of Broome.

That was a once-in-a-lifetime experience, which the boat’s skipper, Jeremy Hunter, captured with his expert use of a drone. The footage is on Facebook and had been viewed by more than 2 million people when I last checked.

The whales had been in the lagoon for some weeks and the crew believed the mother and calf were trapped there. The main access from the sea is a channel that is as shallow as five metres in places, possibly shallow enough to convince the mammals that it is not the exit.

I asked the state’s Department of Parks and Wildlife about the whales’ predicament and received a fairly cautious response, which in no way indicated the animals were in any trouble.

“We know they are there, but they are not necessarily stuck,” a department spokesperson said.

“It is not unusual for whales to be up there at this time of year, I don’t think there is a problem at this stage.

“We are monitoring them.”

Just what anyone could do in any case is not clear. As the drone footage and my personal experience can attest, the whales were very friendly and not afraid of the boat. Yet they did not follow it out of the lagoon on the numerous trips we made in and out.

The fact that whales are returning to our coast nearly 40 years after their commercial exploitation ended is likely to create more of these dilemmas. Here we had a huge animal, unafraid of humans, yet the crew let us know there were very severe restrictions on what they could do as tourist operators and what we could do as tourists.

Will this sensitivity around whales diminish as interaction with them increases? It is likely the rules restricting how people can interact and exploit whales both recreationally and commercially will remain long after such guidelines are relevant to the level of protection the growing whale population requires.

More controversially, sometime in the near future, someone is going to ask if we don’t have too many whales. What may be the trigger for that I am unsure, but it is possible they may reach a critical mass that the southern oceans can’t adequately support. Perhaps the similarly increasing shark population will take care of that, or at least slow its approach.

The fact that our state’s key park manager is unperturbed that some whales might be trapped in a lagoon signals we are some way along this path. Whether they were stuck or not, two whales won’t make any difference to the population – they are not white rhinos.

Even those eco-vigilantes Sea Shepherd seem to have bigger fish to fry, if you’ll excuse a pun, which may or may not be distasteful depending on your sense of humour and cultural upbringing.

Sea Shepherd’s $12 million custom-built Ocean Warrior arrived in Australia last month ahead of its own hunting season, campaigning against Japan’s whaling fleet in the Southern Ocean. I presume there is little chance it would bother using its resources to rescue a couple of stranded whales off the Kimberley. I guess whales are less likely to respond to high-powered water cannon than Japanese seamen.

While I am as cynical as anyone about the scientific value of Japan’s Antarctic whaling program, it is fascinating to see environmental pirates waging such an expensive war to save a species that clearly doesn’t need our protection any more.

There are so many other animals out there that are threatened, you have to wonder if many whale species are a conservation priority any longer. Judging by the lack of official and vigilante concern for the two whales I swam with at Rowley Shoals, they are clearly not endangered in our northern waters. How long until the thousands of these mammals in our Southern Ocean become so prolific that conservation shifts to management?