Another solid gold hit for Spectrum at Penny West

Spectrum Metals has returned a high-grade gold intersection 125m below a historical open pit at its Penny West gold prospect near Youanmi in WA. The intercept of 5 metres grading 28.9g/t gold from 203m down-hole was contained within a wider zone of 31m @ 5.5g/t gold from the same depth. The company said the result might represent a structurally thickened zone and that further drilling is planned. 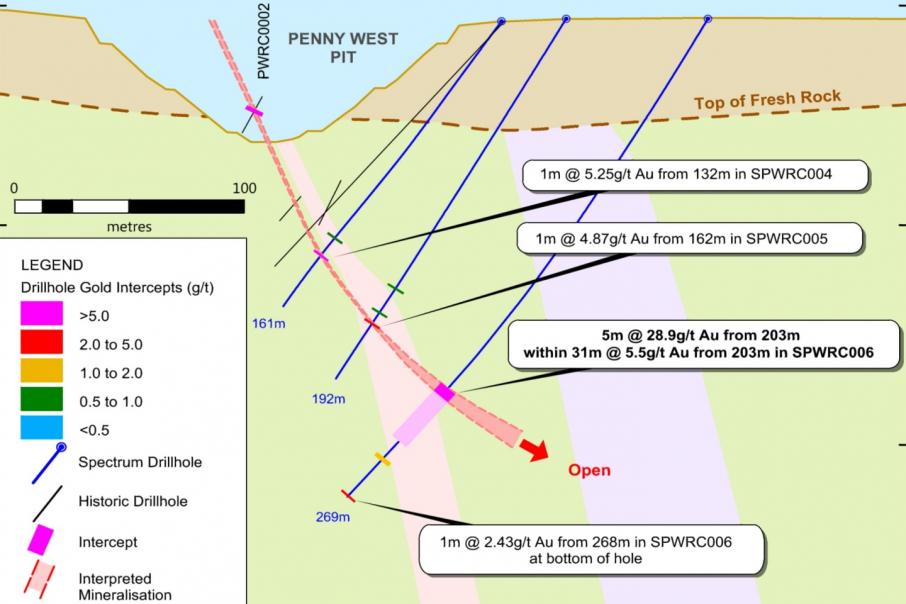 ASX-listed gold developer Spectrum Metals has done it again, with recent drilling unearthing a 5-metre intersection at nearly an ounce to the tonne, 125m below the historical Penny West open pit.

Importantly, the cracking intercept was contained within a much wider mineralised zone of 31m @ 5.5g/t gold from 203m down-hole.

According to company management, the newly drilled area may represent a structurally thickened zone below the southern section of the Penny West pit and has generated new targets for follow up drilling.

Spectrum is on a roll at present, only last week turning up 4m @ 105.2g/t gold from 151m down-hole at the Penny North prospect, 500m north of this week’s high-grade assay results.

Managing Director Paul Adams said: “This is another incredible intersection for Spectrum and once again clearly demonstrates the capacity of the Penny West gold system to deliver significant gold mineralisation.”

“Hole SPWRC006 is the deepest hole on the southern-most line drilled into the Penny West lode in our program and was designed to discover depth extensions to the known mineralisation. This intersection could open up a new exploration front under and south of the Penny West pit”.

The recent run of drilling results has more than justified Spectrum’s purchase of the Penny West gold project for $1m in cash and scrip last October and looks increasingly like a potential company maker.

Penny West is located on two granted mining leases about 25km south from the Youanmi mining centre in the Murchison district of Western Australia.

This means the company effectively acquired the project for close to A$28 per contained ounce last year.

And with the promise of more ounces from its recent drilling programs both at the Penny North prospect and beneath the existing Penny West pit, who knows what further golden secrets this project will reveal.