Undeterred by the high level of competition in the space, a Perth entrepreneur has launched an app which allows users to skip the queues and get onto guest lists at bars and clubs. 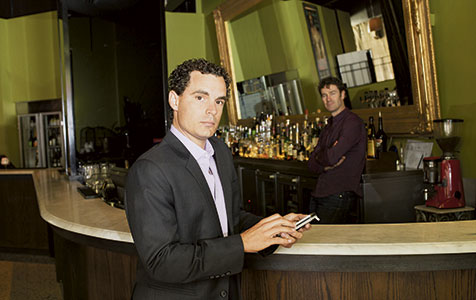 A quick search of Apple’s App Store or the Google alternative, Google Play, reveals hundreds of apps that allow users to search for high-end fashion outlets or book nightclubs, restaurants or vacation spots.

Undeterred by this high level of competition in the space, Matthew Spartalis has launched AccessVIP, which he says aims to cover a range of entertainment options.

AccessVIP is an iPhone app that allows users, among other things, to skip the nightclub queues and get themselves on guest lists ahead of time. With its geolocating features, users can use the app to find restaurants, bars and clubs nearby and plan their night out in real time. Every booking comes with a reward such as a first drink.

It’s an ambitious idea, and no surprise it has been a few years in the planning.

“I had managed a wine bar in my 20s, and of course frequented the odd night spot in my younger years.”

After a period working in the oil and gas industry, Mr Spartalis saw an opportunity to use technology to help people gain access to bars and clubs more easily. With the increasing array of new spots to visit around Perth, it seemed like a good time to develop and launch the service.

Users of the app (AccessVIP refers to them as ‘members’) can also write reviews of the places they visit. Members can connect with others across the app and use the power of social media to help spread the word.

There are two levels of membership – standard and platinum. Standard membership is free for three months, while platinum membership costs $60 a year and comes with more benefits.

Having launched the app earlier this year, Mr Spartalis is about to enter a period of pre-Christmas promotion to increase support across the industry and reach more members.

In the real world, the app is steadily getting noticed.

Patrick Toohey, manager of the East End Bar in High Street, Fremantle, said the business had experienced increased patronage just from being on the app.

“We’re a bit tucked away, just off the cafe strip, so we love the immediacy of the app. People can wander into Freo, find us, look at photos and think ‘hey, let’s try this place’. We’ve even booked engagement and birthday parties from people who have stumbled onto us using AccessVIP,” he said.

For now AccessVIP is concentrating on developing the Perth nightlife scene, but Mr Spartalis aims to broaden this out to other Australian capital cities in the New Year.

The AccessVIP app is available on iTunes and the App Store.