WA financial services company AFG has grown over 20 years to become a major player in the national home loans market and aims to get bigger. 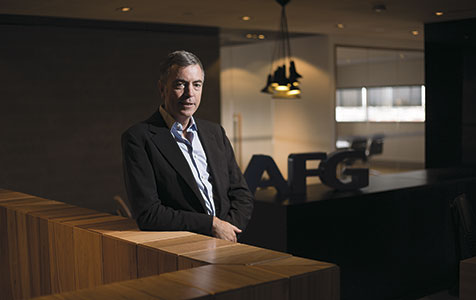 WA financial services company AFG has grown over 20 years to become a major player in the national home loans market and aims to get bigger.

Australian Finance Group managing director Brett McKeon said the past six months had been too hectic for him and his fellow co-founders to celebrate the company’s 20th anniversary.

“We have just been too busy to tell you the truth to really sit back and smell the roses,” Mr McKeon said.

AFG was established in 1994 as a mortgage aggregator offering back-end services, such as technology, products and support to mortgage brokers.

The business experienced rapid success and went on to win Business News’ Rising Stars Award in 2004.

Mr McKeon said the company, which booked a $15.2 million after-tax profit last financial year, had changed significantly over the past decade.

“The business that won the award was our mortgage broking aggregation business, we were running about 6 per cent of Australia’s mortgages back then and now we are doing 10 to 12 per cent – so that business has doubled,” he said.

“We are number one in our space, so that business has gone on to bigger and better things.”

AFG has established other divisions that build on home lending, including commercial finance and insurance, property development and securitisation products, which enable the company to raise capital to fund its mortgage lending.

In 2004, when AFG won the Rising Stars award, the company had just started to develop its first property – a $5.5 million project in Dalkeith.

The property division’s portfolio has since expanded, with the company involved in $400 million worth of projects, including its wholly owned Richmond Quarter mixed-used apartment development in East Fremantle and the joint venture Taskers development in North Fremantle.

Mr McKeon said one of the company’s biggest successes in the past decade was the growth of its national market share for issued home loans.

“It is a fiercely contested industry,” he said, adding that the company was up against the likes of Aussie Home Loans and FAST Group, which are backed by the major banks.

While Macquarie Bank has a 10 per cent stake in AFG, the company’s founding directors hold a 72 per cent interest.

“We are probably the only non-bank owned party now in our space that’s of any size and most of the other brokers have been sold to institutions,” Mr McKeon said.

Mr McKeon said the number of banks the company did business with had shrunk 30 to 40 per cent since it opened in 1994, with many smaller lenders being acquired by the big banks.

He was particularly critical of the federal government’s policies during the global financial crisis, which he maintained provided more support for the big four banks than their smaller counterparts and subsequently reduced competition.

“The government put a (credit) guarantee in place for banks, for instance, but what they did was give a much sweeter guarantee to the big four banks than to the balance of the market,” he said.

Mr McKeon said there were a lot of moments where he was left wondering if there was going to be a tomorrow for AFG during the GFC.

“There was a lot of uncertainty, but we went into the GFC as a reasonably conservative business, with no borrowings and a lot of cash at bank,” he said.

“So that put us in a good position to move forward because a lot of businesses had a lot of debt.”

However, the GFC forced the company to shelve plans to list on the Australian Securities Exchange.

“We thought it would be a nightmare to list in that environment,” Mr McKeon said, adding that the company had invested a lot of capital preparing for the IPO.

“It’s a lot of money to throw down the toilet but we did and it’s probably the best money I have ever lost.”

Mr McKeon said the company re-examined the possibility of floating every few years, but dismissed any near-term plans to list.

AFG also had to delay the launch of its securitisation products amid the GFC.

“There was a lot of uncertainty around funding for mortgages at the time of the GFC so we didn’t know if there was going to be the liquidity in the market, and our securitisation business we had to put on hold for a while,” Mr McKeon said.

“That was a challenge because we had to spend some money to get it up and then we had to put it on hold for about three or four years.”

“Last year we did two transactions in the international markets, where we had investors buy about $600 million worth of our paper, or our securitisation products,” Mr McKeon said.

“So in 18 months we will have completed nearly $1 billion of term transactions and had some big global players look to buy our paper, which has been good news.”

Mr McKeon said the company would focus on growing its property development and securitisation products, but he also wanted to increase its national market share for issued home loans to 15 per cent.

“At the moment we are writing 9,000 to 10,000 mortgages a month, and to (grow that) is quite a challenge because there is a lot of competition and there are not many people (banks or brokers) who get that sort of market share,” he said.

He said despite being busier than ever, he would make sure to celebrate the company’s anniversary and it’s achievements in that time.

“It’s been a period of record volumes (for our mortgage brokerages), record activity with our property development business and going to the market with our third term (securitisation) transaction, there has been too much going on to sit back and enjoy it,” he said.

“It’s a bit of a pity really, but we’ll get around to it at some point.”