A pizza Kal by the beach

The big difference between setting up a pizza shop in Scarborough and running one in Kalgoorlie is the scenery. Dan Wilkie reports. 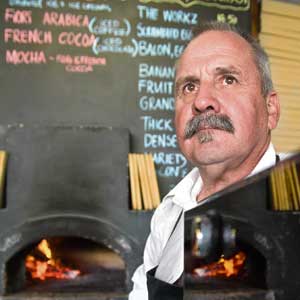 ALL TASTE: Paul Bizzaca says the Budgie Smuggler is one of the most popular pizzas at his Scarborough eatery, Pizzaca’s. Photos: Grant Currall

PIZZACA'S Caffe and Pizzeria has only been open since March this year, but owner Paul Bizzaca says it's already making an impact in the seaside suburb of Scarborough.

Pizzaca's is a true family venture. Mr Bizzaca's wife, Mandy, is a partner in the business, sisters Karen and Anthea take care of the duties in the kitchen, nephew Jamie is a barista, and his daughter, Kara, is part of the wait staff.

"It gets back to the family side of things; we're very hands on, we're in the customer's face," he says.
"Scarborough is like a village, it's like a community, most people know each other or they want to get to know each other, so it's become a community venue that people meet at.

"That's sort of how it's been; it's been good in that regard, but lucky."

Mr Bizzaca is a hospitality veteran. He cut his teeth in the industry managing at The Brisbane and Northbridge hotels in the early 1980s, before moving to Kalgoorlie in 1989, where he would make an indelible mark on the Goldfields' culinary landscape.

To establish a point of difference, he installed a wood-fired pizza oven, the first in the city.

The rest, as they say, is history, as Judds pizzas became a renowned Kalgoorlie attraction.

"Our concept was to do gourmet pizzas, which were different to what was the run of the mill in Kalgoorlie at the time, with a bit of a trick-shot to it," Mr Bizzaca says.

"The trick-shot was the names that we gave them, and the toppings. The toppings were quite unusual but it caught the imagination of people and they wanted to try them."

The unusual names remain on the menu at Pizzaca's, a nod to pop culture and current affairs.
A tandoori-style pizza is known as The Little Master, no doubt in reference to Indian cricket hero Sachin Tendulkar.And the US president gets a run with the Obamarama, while Mr Bizzaca says the Budgie Smuggler is an undeniable favourite in Scarborough.

Mr Bizzaca said he has had to make little change to his business philosophy in running Pizzaca's for city diners.

"Up there we were a big fish in a little pond; punters in Kalgoorlie were used to fairly ordinary coffee and toasted ham and cheese sandwiches in a cafe-type situation," he said.

"So we brought in Caesar salads, focaccias and different types of coffees.

"The difference now coming down to Perth is we're the small fish in the big pond.

"That was the challenge, whether we could have some sort of an effect down here with the way we do things.

"I'm a punter at heart, you've got to take a punt every now and then, they're not all going to get over the line, but if you do put that extra effort in they'll go a lot closer to the line than if you did nothing."