A pair of Greeks sharing dips

Authenticity is the key to the success of Perth’s newest Greek eatery, Brika. 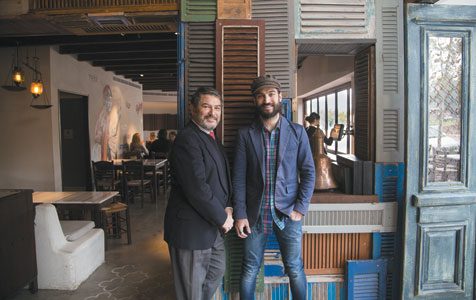 AMBROSIA: Danny (left) and Simon Psaros say they won’t rest on their laurels despite the early success of the inner-city restaurant. Photo: Attila Csaszar

Authenticity is the key to the success of Perth’s newest Greek eatery, Brika.

Brika owner Simon Psaros has taken a slice of the Mediterranean and brought it back to Perth.

Mr Psaros said he spent the best part of a year in Greece exploring tavernas and quirky bars to immerse himself in Greek hospitality, with a view to replicating it in Perth.

“I haven’t spared anything with respect to décor, music, everything has been sourced from Greece, down to the tables, and the chairs, my ouzo, my wines, it’s all Greek,” he said.

“I think if I made a half-hearted attempt at it … we wouldn’t be anywhere near as full as we have been.

Mr Psaros said the concept behind Brika was for patrons to experience as much of the menu as they can, with the venue ideally suited to large groups of friends, or ‘parea’, as the Greeks say.

“The true Greek way of dining has been introduced to a degree in Perth by Spanish and Mexican tapas places, but sharing truly goes to the heart of the way we eat and dine over there,” he said.

“It’s something I’ve wanted to come and eat at and experience myself, and I just thought if I don’t take the risk, I might be waiting a long time.”

Mr Psaros said the restaurant also added to the appeal for potential residents in the apartment building it sits in, which was developed by Psaros Property Group at 177 Stirling Street.

“It adds enormously to the dynamic and the urban feel of the place,” he said.

“It’s certainly a good sales tool, for the residents to have a place to roll out of bed and grab a coffee in the morning.”

“I certainly have a vision where I’d like to do another one of these, because we’ve got around 600 apartments we want to bring to market in and around this area.

“But that’s really up to Simon. We’ve identified and bought a site in Beaufort Street where we’re planning to build 40 apartments, but we’ll make that decision in the next couple of months.”