Nine WA-linked resources businesses are ranked among the country’s top 20 corporate taxpayers, despite a widespread perception the industry does not pay its way. 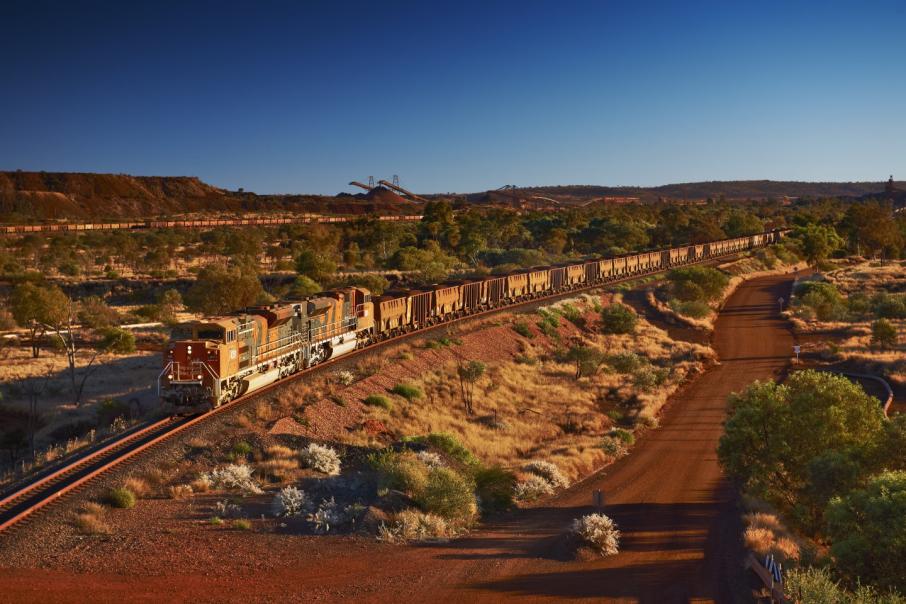 Nine WA-linked resources businesses are ranked among the country’s top 20 corporate taxpayers, despite a widespread perception the industry does not pay its way.

Mining and energy businesses with operations in Western Australia are well represented among Australia’s largest taxpayers, with nine companies contributing nearly $10 billion between them.

Those nine WA-linked resources companies were all ranked in the nation’s top 20 taxpayers in 2017-18 (see table), and between them contributed about 11.8 per cent of the country’s total corporate tax take.

*Note: Anglo American Australia ranked in the top 10 resources companies but has no WA operations.

BHP Group was Australia’s second largest business taxpayer, after Commonwealth Bank of Australia, according to the latest tax transparency data released by the Australian Taxation Office.

The numbers show BHP paid $3.5 billion of company tax in the 2018 financial year. It paid a further $634.6 million in Petroleum Resources Rent Tax.

BHP’s published breakdown of its tax payments showed the WA iron ore division’s company tax bill was $2.1 billion in 2018, while $1.1 billion of royalties flowed to the state government.

The company’s WA petroleum unit, which owns a sixth of the North West Shelf Venture, reported a tax loss of $22.7 million.

Miners with significant WA operations such as Rio Tinto, Alcoa of Australia and Fortescue Metals Group also featured near the top of the rankings.

However, the complexity of corporate structures and the tax system can lead to incorrect assertions.

This is a misreading of the situation.

Woodside Petroleum owns 90 per cent of two other entities on the list – Burrup Train 1 and Burrup Facilities – which operate LNG processing plants.

Between them, the two Burrup businesses paid $493 million in tax for the 2018 financial year, and those profits are not double taxed when they enter the parent’s accounts.

“Woodside Petroleum’s profit includes revenue from the ‘Burrup’ entities that has already been taxed in Australia, for which a tax offset is available,” the company said in its tax transparency statement.

“The Woodside Petroleum entity is the explorer and producer of our Australian petroleum projects and includes the allowable tax deductions and offsets relating to these activities.”

An example of the opposite case to Woodside is the Rinehart family’s companies.

Here, it is the parent entity that covers the bill, not the subsidiaries.

Both entities pass on profits to Hancock, which reported taxable income of nearly $1.2 billion and $352 million in tax.

Japanese businesses feature regularly on the list, with complicated structures.

Tax paid by five entities in which Mitsui has varying stakes totalled about $1.1 billion. 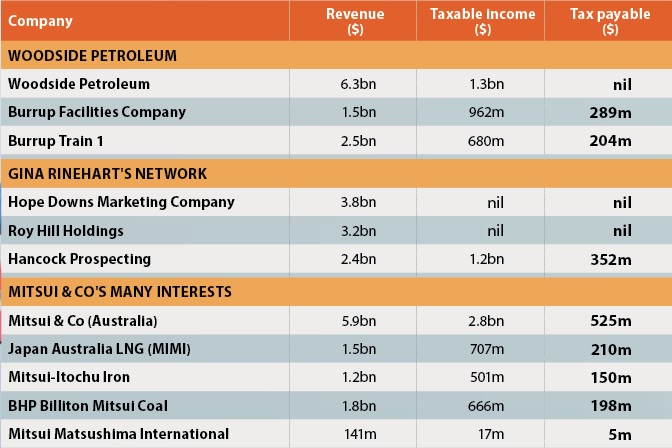 Some businesses have lower tax liabilities because of major investments, and their costs are deducted over time through depreciation.

A good example is ExxonMobil, which reportedly last paid company tax in 2013.

Since then, Exxon has invested in Gorgon LNG in WA and Kipper Tuna Turrum in Victoria.

“ExxonMobil Australia continues to be in an income tax loss position in the short term as the Australian operations recover the recent significant capital investments in long-lived producing assets,” the company said in its tax transparency statement.

“We expect to have taxable income from 2019, however due to our carry-forward tax losses, we will not be in an income tax paying position until the early 2020s.”

The company paid nearly $2.5 billion in fuel excise in the 2018 financial year, and $441 million in Petroleum Resource Rent Tax.

Shell, which runs the Prelude FLNG plant, said it had made a profit of about $2.1 billion in calendar 2018, which would imply company tax of about $617 million.

But Shell said depreciation was $759 million, and tax losses from prior years were $152 million, so no corporate tax was owed.

Royalties and fuel excise were $254 million.

The operator of the Gorgon and Wheatstone LNG plants, Chevron Australia, also paid no corporate tax, and the business’s tax transparency report sheds some light as to why.

“Since 2009, Chevron Australia has paid around $5.8 billion in state and federal taxes and royalties,” the company said.

“Forecasts show by the early to mid 2020s, Chevron Australia will pay $2 billion to $3 billion a year in federal and state taxes and royalties.

“During this period, the projects have no revenue, but only costs.”

Chevron noted it had spent 37 years developing the Gorgon gas field before it began earning revenue.

However, Chevron has also been aggressive in its transfer pricing arrangements, which determine how much tax is paid in local operations compared to its foreign entities.

In 2017, the company lost a legal battle against the ATO and had to backpay $340 million of taxes.

Chevron’s US parent borrowed at a 1.2 per cent interest rate, and loaned the cash to the Australian subsidiary at a 9 per cent rate.

The company contended that was an arm’s length rate of interest for an unsecured loan, but the ATO successfully argued that Chevron’s parent would have offered security for any loan the subsidiary had borrowed.

Probably the best measure of the level of corporate tax avoidance is the ATO’s tax gap analysis, which is an estimate of how much more tax would be collected if every taxpayer was perfectly compliant with tax law.

The office estimates a gap of about 4 per cent of revenue from large corporates in the 2017 financial year, the latest for which data was available, or about $2 billion.