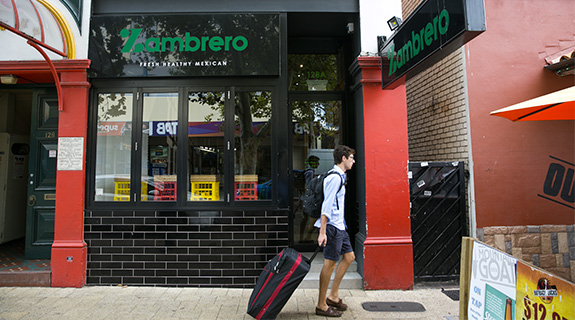 Zambrero's Northbridge outlet is one of 16 currently in WA.

Quick service restaurant franchise Zambrero is making good on a 2013 pledge to open 50 stores in Western Australia by 2018, announcing plans to open 15 new outlets in the next 12 months.

The expansion follows the Mexican food brand opening 14 WA stores in 2014, with its outlets spanning from the Perth metropolitan area to South Hedland in the north, through the Goldfields and also down south.

Zambrero’s next two WA outlets will open in Fremantle and Tuart Hill, while by the end of 2015, the franchise will have 30 stores in the state.

It originally announced its ambitious expansion plans in the middle of 2013 – to open 50 outlets by 2018.

The franchise was initially established in Canberra by Sam Prince, a doctor who worked his way through medical school at various restaurants.

Its business model also includes a significant philanthropic slant, with part of the profits going to humanitarian efforts in Asia, Africa and the Americas.

“The franchise and business model are largely successful due to our commitment to good food and good service, and our dedication to tackling world hunger through Plate4Plate – our ‘Mexican with a mission’ philosophy that enables customers to give something back to the world just by purchasing a meal,” Zambrero WA area developer Gordon Bain said.

Franchisees pay royalties of 6 per cent and a marketing levy of 3 per cent per month.

Mr Bain said the Fremantle and Tuart Hill stores would feature a new design style and be the first of the franchises next generation outlets.

Zambrero is currently ranked 51st on the BNiQ Franchises list with 16 stores, but if it follows through on the plan to open 50 outlets it would move up to 12th and become the state's largest network of quick service restaurants.