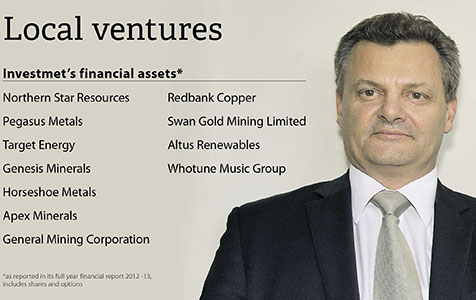 BIG CHANGE: Investmet is now largely owned by Michael Fotios after other investors sold out in an arrangement which changes the share registers of many of the companies it held interests in.

It’s understood that Wyllie Group, along with a group of minority shareholders, participated in a share buy-back to exit the syndicate earlier this year, which has left Investmet almost entirely owned by Mr Fotios and interests associated with his family. It has also significantly changed the share registers of several juniors resources companies (see below for analysis of the announced changes in recent weeks).

The buy-back appears to have followed a period of board disharmony over several key investment decisions and coincided with significant changes to the board, including the June departure of Wyllie executive chairman Wayne McGrath and former BDO managing partner Stephen Mann.

Mr Fotios said Investmet had undergone significant change during the past five months, partly as a result of the impressive returns shareholders had made from Investmet’s interests, including its stake in gold miner Northern Star.

It halved its stake in Northern Star to 5 per cent in a well-publicised sell-down in late 2012 at $1.35 per share.

Investmet ceased to be a substantial holder when it sold 4 million Northern Star Resources shares at 95 cents a share in January this year, days before the stock went into a trading halt pending the announcement of a $100 million placement at 86 cents a share.

“Because we have been so successful with Northern Star these people have made a very big return; the initial shareholders came in at around 10 cents a share and some others at 30 (cents) some years ago,” Mr Fotios said.

“And they all left with a return of effectively $1.20 or $1.30 a share, including a franking credit … it was a pretty substantial return in four years.

“And I can understand their view, when you make a relatively small investment but you see that sort of a return and it becomes a large part of your portfolio you would like to get your hands on it.”

However, Investmet’s most recent financials offer a rare glimpse into the workings of a significant backer of junior resources companies and even a music-related investment called Whotune, suggesting there was tension at board level over the company’s investment in Swan Gold Mining and Apex Minerals.

The independent auditors’ report includes a section titled ‘unauthorised transactions’, and details a loan of $15.2 million to Swan Gold and an investment of more than $1 million in Apex.

Mr Fotios is executive chair of Swan Gold’s star-studded board.

The auditors report says: “As a result of the company (Investmet) not keeping minutes of informal director meetings we have not been able to verify board approval of investing and related party transactions.

“We have seen minutes of shareholder meetings … which state the transaction was not authorised by the board. However, discussions with directors reveal differences of opinion in relation to the level and timing of authorisation given.

“From discussions with the directors and review of minutes of shareholder meetings, it has been brought to our attention that an investment of $1,060,330 was made in Apex Minerals NL without any knowledge or authority of the board of directors (other than Mr Michael Fotios).”

Apex subsequently went into administration and was wound up in October 2013.

Mr Fotios acknowledged there had been some disagreement between board members over the investment in Swan Gold.

“In the end we decided to put in the accounts that that was the position, it was just something we thought we should disclose.”

He said the Swan Gold investment was the purchase of the creditor trusts that owned the debt owed by Swan to those trusts.

“Those trusts were formed out of the administration of Swan in 2008 … and we came in after the ex-Austrian backers of Michael Kiernan, who had been funding the company up until late 2012, we came in and did a deal to fund Swan but also buy the debt,” Mr Fotios said

“We are now converting that to equity as part of the capital raising … the valuation put on the Swan investment, by the expert that reviewed it, was significantly more than we paid for it.”

Mr Fotios plans to relist Swan Gold in October once it has completed a raising of up to $20 million at 20 cents a share.

He said the disagreement between members of the Investmet board could be distilled down to varying appetites for risk.

“Investmet originally was set up to look at high-risk, high-leverage investments and Northern Star was originally in that category … it’s become something much different to that now,” Mr Fotios said.

“Because we made so much money on the Northern Star side, people perhaps didn’t want to risk that.”

Mr Fotios denied there was any ill feeling between himself and the former board members and shareholders, who had received “a disproportionate amount of Northern Star shares”.

“I kept the Swan investment in Investmet and disproportionately distributed Northern Star shares to the people who left, which was what they wanted,” Mr Fotios said.

“We had been talking about a buy-back for some time. One of the only ways in an unlisted company to get out is a buy-back, so pretty much from day one, these are largely friends, they knew that was one of the options.”

The Wyllie Group’s Wayne McGrath did not wish to comment on the matters raised in the annual report, except to say that Wyllie Group was now out of Investmet.

Wyllie still has interests in a number of companies associated with Mr Fotios, including Swan Gold.

“Our position now is that we are out of Investmet,” Mr McGrath said.

There has been a ripple effect through the junior resources world due to the unravelling of an investment relationship between venture capitalist Investmet and its investors, including the blue chip private wealth fund Wyllie Group.

At least three listed Western Australian resources companies have released explanations for what they have referred to as complex and confusing changes of share ownership due to a decision in early June by Investmet’s shareholders, including Wyllie Group, to approve a buy-back of the entity’s shares.

The buy-back resulted in an in-specie distribution of shares Investmet held in several other companies. Investmet remains a stakeholder in several listed companies, but it is now mainly a vehicle for Mr Fotios and interests associated with him and his family.

Redbank Copper, Target Energy and Pegasus Metals have recently issued statements to explain the situation where ownership of their shares has been transferred from Investmet, often a major shareholder, to former shareholders in the vehicle.

The change of interest has affected millions of dollars worth of shares and prompted directors’ interest statements from those involved such as Mr Fotios and Stephen Mann, who have had their beneficial interests affected one way or the other.

While the full extent of the ownership changes are unclear, Investmet’s 2012-13 annual report shows that at the end of that financial year it had shares worth $31.5 million on a fair value basis, a sizeable portfolio even though it was down from $44.3 million the year before.

Whether it was different attitudes to risk or differences of opinion about how business should be managed, Investmet shareholders opted on June 11 for a buy-back whereby they received in-specie distribution shares instead of cash.

That has changed the share registers of several WA-listed companies.

For instance, last week Redbank Copper reported that Wyllie Group had received about 73 million shares on June 30 worth $219,120 as part of the Investmet buy-back.

That parcel boosted its stake in Redbank, which shares an address with Investmet, to almost 20 per cent from just over 17 per cent, after accounting for a previous parcel of 8 million shares that were sold.

Redbank director Damian Delaney also disclosed the acquisition of 7.8 million shares as part of his interest in the Investmet buy-back, while Mr Fotios recorded a 336 million reduction in his indirect interest in the company – worth almost $1.7 million at the deemed price of 0.5 cents per share.

Mr Fotios retained 51.8 million shares directly, 200 million through his company Delta Resources Management and 232 million shares through Investmet after the buy-back, about 20 per cent of Investmet’s original equity.

The transfer of Redbank shares due to the Investmet buy-back process started on June 30 and took almost two months to complete.

“The distribution was complex and resulted in the transfer of securities to a number of entities,” Redbank company secretary Shannon Coates told shareholders to explain the changes and apparent delay to informing the stock market.

“There was some confusion as to when the in-specie distributions of Redbank Copper shares to various Investmet shareholders had actually occurred.”

In June, Target Energy announced a similar change due to the buy-back instigated by its then largest shareholder.

More than 113 million shares, or about a quarter of Target’s equity, was transferred at a deemed price of 4.5 cents per share- totalling around $5 million. According to Target, each participating shareholder had agreed to a voluntary escrow arrangement to retain their shares for six months and then keep at least 50 per cent of their stock for a further six months.

Investmet retained about 4 million shares while Wyliie Group doubled its stake in Target to 45.5 million shares, worth around $3 million and representing 10 per cent of the equity.

Target director Stephen Mann boosted his beneficial interest to 21.2 million shares, or nearly 5 per cent of the company, from 6.3 million shares previously.

Similarly, in July Pegasus Metals advised the market of changes to its shareholder base due to the “complex” distribution from the buy-back. Mr Mann and Mr Fotios announced changes to their holdings in directors’ interest statements.

“There was some confusion as to when the in-specie distribution of Pegasus shares had actually occurred,” Pegasus director and company secretary Graham Anderson wrote in response to a query from the ASX compliance division.

Investmet had disposed of more than 24 million Pegasus shares, or 20 per cent of its equity, on June 16, retaining 17 million shares or almost 14 per cent. Mr Fotios has an additional 5.3 million shares in his own name or through other vehicles than Investmet.

At Horseshoe Minerals in late June, a change of directors’ interests notice by Mr Fotios revealed 8.1 million shares, or nearly 5 per cent of the company, were disposed of as part of the Investmet buy-back process.