Winning with the Flipside

A family cafe, new bar and burger combo and cocktail lounge are on the cards for the owners of Flipside. Emily Morgan reports. 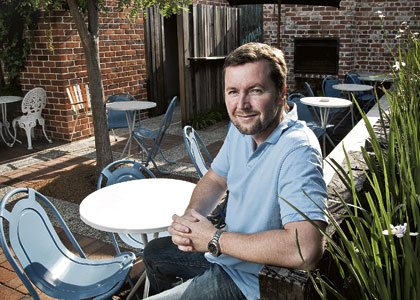 TWO SIDES: Hamish Fleming and his wife, Siobhan Blumann, opened the first Flipside in 2006 and are poised to more than double the size of the business next year with four new ventures. Photos: Grant Currall

Hospitality operator is not a title that comfortably fits Hamish Fleming, who developed Flipside burgers with his wife Siobhan Blumann in 2006.

In the early days Mr Fleming manned the grill on every shift and, as the business expanded to another store in Wembley in 2008 and Mrs Brown, a small bar next to the North Fremantle store, in 2009, many burgers were flipped and a few wines poured.

But he is not a barman.

“I am not the most gregarious host in the bar and you won’t see me down here often. I like the process of starting new things,” Mr Fleming says.

Rather, he and Ms Blumann prefer to sit behind the ever-busy scenes and creatively plot the next venture.

With another Flipside-bar combination due to open soon in Northbridge and an approved large project ready to roll in North Fremantle, the term hospitality developer seems to be the best fit for the pair.

The business has expanded slowly over the past six years, but could more than double in size next year, with seven venues in the portfolio.

The Northbridge Flipside and Mechanics Institute bar upstairs edges away from the business’s traditional model, which was built on providing a family friendly casual dining option in Fremantle alongside a friendly relaxed suburban small bar.

While North Fremantle’s Flipside is nestled in between antique shops and the Wembley store is removed from any obvious pedestrian thoroughfare, the Northbridge site is in busy, revitalised William Street.

Going from a suburban burger bistro to a competitive strip is not a shift that fazes Mr Fleming.

The Northbridge site is bordered by Central Tafe and the Cultural Centre institutions, which provide a good flow of patrons.

Fans of Flipside can rest assured not much will change on the menu and the bar will be run on the same small wine-bar model.

The only addition will be a dumbwaiter to deliver burgers to patrons in the upstairs Mechanics Institute.

“It is quite a straight-forward business model really. We are doing a fairly simple product, which we think we do really well,” Mr Fleming says.

“We don’t complicate it, our food offering is burgers and chips and it means we are running a straight-forward bar as well. We offer a couple of cheese platters in the (Mrs Brown) bar but we don’t need to staff a full kitchen.”

The pair have joined forces with another business partner and bought the original Fremantle town hall across the road from Mrs Brown and Flipside.

They have big plans to reinvigorate the site and plan to create a hospitality hub in the strip.

The art gallery and antique retailers will remain as tenants in a large part of the building while the northern portion of the building will be an “old-world glamour” cocktail-style lounge bar. The southern end of the property will be a family friendly cafe and pizza bar at night.

When Mr Fleming describes the building’s high ornate ceilings and the potential to create something special, the hospitality developer side of him comes alive.

“It is such a magnificent space, with four-and-a-half-metre ceilings and we can do something quite special with that,” he says.

“William Street is the same, it is a beautiful old building and the fun bit for us is setting it up.”

Flipside was almost an accidental development. After Mr Fleming and Ms Blumann moved to Perth from their corporate lives in Hong Kong they leased their first store space in North Fremantle, not intending to move into hospitality.

But memories of successful burger bars in New Zealand and Melbourne provided the right inspiration for a casual dining in the relaxed suburban location.

Consolidation of the business will follow the next period of growth to guarantee it runs smoothly.

But Mr Fleming says that while there is little chance of the brand becoming a one-on-every-corner franchise, there is the potential for further growth of Flipside.

“There is room for a few more Flipsides but we want to keep it as a niche brand and put our energies into what opportunities come up,” he says.