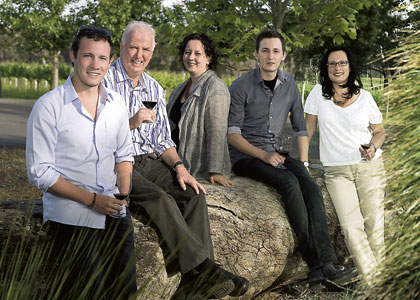 HOWARD Park Wines has rebranded itself as Burch Family Wines and plans to build an educational tasting facility at its winery in Margaret River to better cater for the growing number of Chinese tourists.

The name was chosen to create a distinction between the winemaker’s umbrella company and its three production labels.

The Burch family members now work in the company and they wanted to create an umbrella name for the company’s different brands.

Burch Family Wines was started in 1986 by Jeff and Amy Burch.

“When Jeff and I first started many years ago it was just us working with our winemakers,” Mrs Burch told Gusto.

‘‘Now all my family is involved in the wine business.”

Today, their children work in the business. David is sales and marketing manager, Richard manages its east coast brands, and Natalie is operations manager.

“Calling it Howard Park Wines was misleading; we needed to reinvent a name for the umbrella company over these brands and Burch Family Wines was the logical choice,” Mrs Burch said.

“It’s a marketing exercise to explain to people that all these wines come under one name.”

Howard Park Wines has been retained as the trading name.

A $110,000 Tourism WA grant will help pay for construction of the tasting facility, called the Wine Chapel, which will incorporate English and Mandarin translations and a ‘museum’ educational experience.

“We’ve got to match the (Tourism WA) grant dollar for dollar and we’ll probably have to put a bit more in,” she said.

“It will be a proper tasting room, it won’t just be a cellar door, where we will be able to talk to and cater for up to 25 people.

“At this stage I doubt we’ll be able to employ Mandarin-speaking people but our ultimate aim is to employ young Western Australian Mandarin speakers at the new facility.”

Burch Family Wines has recognised the emergence of the Chinese market, increasing its exports, but has chosen to focus on a wider range of countries to lift sales.

“We don’t see China taking the lion’s share of the market right now … a spread is the safest option,” Mrs Burch said.

“Our biggest market is still the UK … and Asia the next biggest, we’re in a lot of small countries such as Mauritius, Madagascar and Gibraltar.

“The UK is not a great market at the moment with the dollar the way it is but it’s not a market you want to move away from.”

The company has strong ties with Europe through its partnership with French winemaker Pascal Marchand. In 2007 it produced the first vintage of Marchand & Burch made from Australian grapes and the label has expanded to include wine produced from the Burgundy region in France.