Wiluna Mining Corporation is now cashed up to complete the first phase of its sulphide expansion program, with the WA gold producer finalising US$42 million of credit from multi-national commodity trader, Mercuria. The loan will be used to finalise construction of the Phase 1 sulphide plant that will lift Wiluna’s production profile to more than 120,000 ounces of gold per annum. 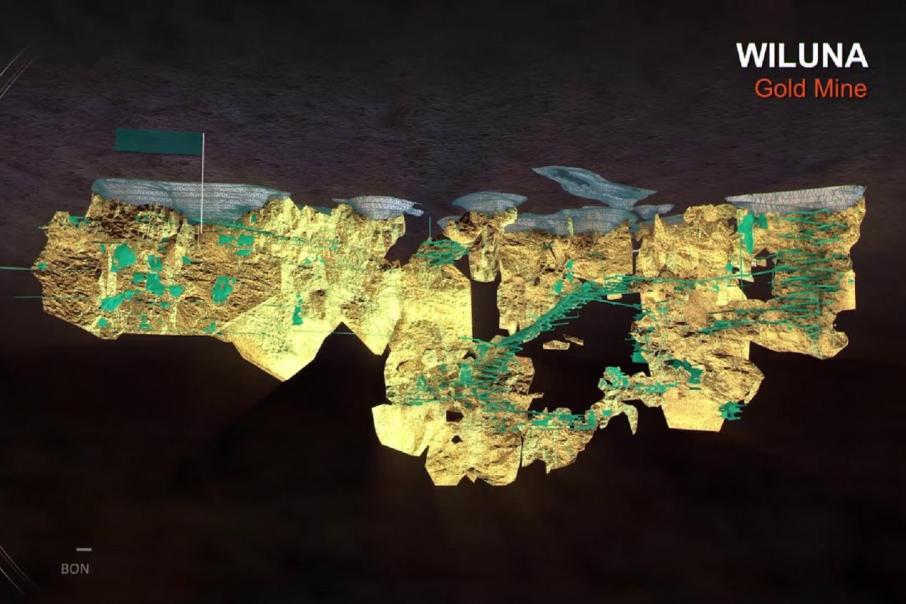 Three-dimensional modelling of the gold lodes at Wiluna, where drilling is rapidly unearthing one of Australia’s largest goldfields. Credit: File

Wiluna Mining Corporation is now cashed up to complete the first phase of its sulphide expansion program, with the bullion producer finalising its second tranche of funding from multi-national commodity trading heavyweights, Mercuria.

The company has approval for a US$42 million loan from Mercuria which will be used in construction of the Phase 1 sulphide plant which will lift Wiluna’s production profile to more than 120,000 ounces of gold per annum.

Mercuria’s funding will also help facilitate completion of the company’s feasibility study for a move into the Stage 2 expansion program, which will likely lift production from the resurgent Wiluna field past 240,000 ounces of gold a year.

The loan was executed on similar terms to earlier arrangements between the two groups, with funds to be drawn down immediately upon finalisation of the appropriate documentation and repaid over a four-year period.

Mercuria’s loan is secured via a prepaid gold swap with the company also hedging 160,000 ounces of gold production, which will mature during the term of the loan and also serves as a condition of the funding.

Wiluna has also reported Stage 1 construction is proceeding on schedule and on budget, with commissioning expected to be completed in the fourth quarter of 2021.

Wiluna Mining Corporation Executive Chairman, Milan Jerkovic said:“Stage 1 is on track for October 2021 commissioning, and the Stage 2 feasibility study will be completed by the end of calendar year 2021. This includes drilling to expand the Wiluna mineral resources which is expected to increase the ore reserve from 1.3Moz to 1.8Moz as part of the study, and the Stage 2 mine plan.”

More than 4 million ounces of gold has been produced from the historic field via both open pit and underground operations over more than a century.

The company’s ongoing development drilling has outlined a further 7 million ounces of resources, cementing the field’s gold endowment as one of the largest of any major gold mining districts in Australia.

Wiluna Mining is currently augmenting the existing mining and processing operation and attacking the goldfield on multiple fronts, including drilling out a cluster of shallow resources to feed the existing gravity and leach circuits.

With the sulphide circuit coming online later this year the company is now stepping up development of an array of easily accessible underground positions as it looks to boost production in the months ahead. The move to generate a gold-rich sulphide concentrate will lift gold production from its current rate of around 60,000 ounces per annum to over 100,000 ounces per annum in the 2022 financial year.

With Wiluna getting the funding and attention it has long required, its owner could be poised to begin its rise through the ranks of Australia’s gold producers and begin to uncover the asset’s full potential.