With a combined gold ore reserve of some 1.4 million ounces grading 1.7 grams per tonne and a total resource of 93.2Mt grading a solid 2.13g/t for around 6.4m ounces, Wiluna Mining is having no trouble finding even more gold – all within the shadow of the old headframe. The company’s exceptional recent results coincide with its recent rebrand from Blackham Resources to Wiluna Mining. 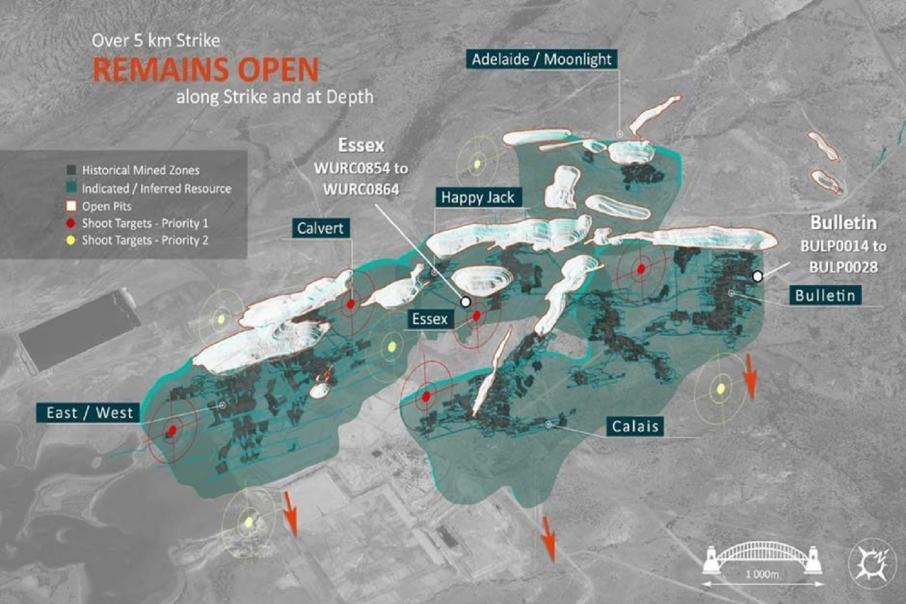 With a combined gold ore reserve of some 1.4 million ounces grading 1.7 grams per tonne and a total resource of 93.2Mt grading a solid 2.13g/t for around 6.4m ounces, Wiluna Mining is having no trouble finding even more gold – all within the shadow of the old headframe.

The company’s exceptional recent results coincide with its recent rebrand from Blackham Resources to Wiluna Mining, reflecting its namesake project located in the north-eastern Goldfields of Western Australia.

Seven drill rigs are going hard at it now at Wiluna as part of the company’s strategy to increase its multi-million-ounce resource and assess the planned “stage one” sulphide ore expansion project.

The company said the historically mined Bulletin shoot ran between 7g/t and 8g/t and produced a serious 900,000 ounces of gold.Wiluna’s current mining inventory at Bulletin is currently 67,000 ounces grading at 4.2g/t and the company said the new results are likely to boost the grade of the existing resources and reserves.

Wiluna Mining’s Executive Chair, Milan Jerkovic said: “We’re targeting high-grade shoot discoveries because every 1 g/t increase in the grade in the sulphides, could result in an additional 25kozpa of production in Stage 1 and 50kozpa under our Stage 2 scenario so grade is obviously extremely important to the project’s economics.”

“Our 4-5-year goal with the development of Stage 2 is to become a Tier 1 gold mine in a Tier 1 jurisdiction”.

With an initial 4.5 kilometres of drilling well underway, Wiluna Mining has a clear vision to increase the geological confidence in the deposits across its plethora of sulphide resources whilst adding valuable tonnes to its bottom line.

Meanwhile, the company is aiming to add new discoveries to the mix of deposits at Wiluna as it plans to lift its annual gold ore production initially to around 120,000 ounces a year before attempting to join the 200,000 ounce a year club courtesy of a stage two expansion of the sulphide ore.

Wiluna’s drilling into the Essex deposit has also discovered a new high-grade gold zone and a new parallel lode that is open to the south. Further drilling is planned to increase the bulk and tenor of the existing 38,000 ounce mining inventory that grades 4.6g/t.

Fortunately for Wiluna Mining, previous operators already established the underground infrastructure below the current mine level at Essex, right to the base of the ore body. This means that access to mine the ore will be an easier exercise for Wiluna, who will now spend less on capital infrastructure and rehabilitation.

The deep development at Essex also provides a platform to drill the further reaches of the mineralisation, which also saves on drilling long, deep holes from the surface.

The drill rods have also been turning at the Calvert and East Lode zones too where results are expected in the coming month, rounding out the company’s initial stage of the sulphide drilling plan.

Wiluna Mining’s sulphide drilling plan underpins its plan to produce a ‘conventional high-grade gold concentrate’ to sell into an emerging and lucrative market, with offt-takers already expressing an interest.

The newly rebranded Wiluna Mining said its plan to upgrade the current resource is on track for about the end of September this year and a reserve update should follow within the final Quarter.

Things are really moving now for Wiluna - who is looking to make it as a top tier miner in the coming years.

Is your ASX listed company doing something interesting? Contact:matt.birney@businessnews.com.au