Adriatic Metals continues to deliver the goods at the Raska project in Serbia with more wide shallow zinc hits including 36m at 3.7 per cent zinc, 1.4 per cent lead, 21 g/t silver and 0.2 g/t gold from surface. A third rig is due on site next month as the company targets a maiden JORC resource this year. 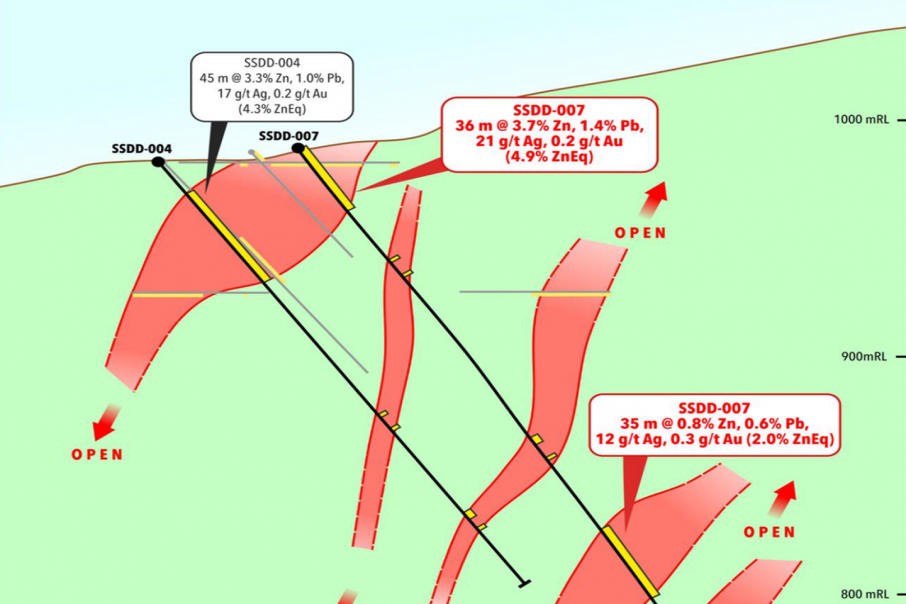 Adriatic Metals continues to deliver the goods at the Raska project in Serbia with more wide shallow zinc hits including 36 metres at 3.7 per cent zinc, 1.4 per cent lead, 21 grams per tonne silver and 0.2 g/t gold from surface. A third rig is due on-site next month as the company targets a maiden JORC resource this year.

Since listing on the ASX in 2018, few if any companies have enjoyed the exploration success of Adriatic. The company’s endeavours at the Vares silver-zinc project in Bosnia and Herzegovina saw its share price rocket from around 20 cents to above the $2 mark. Adriatic is now looking to add Raska in neighbouring Serbia to its string of exploration successes.

The company acquired Raska last year via Toronto listed Tethyan Resource Corp. The 116 square kilometre project holds the historic Kizevak and Sastavic zinc-silver mines around which the company’s on-going 25,000m drilling campaign is focused. Adriatic is targeting a maiden JORC compliant resource in 2021 at Raska and will look to undertake a scoping study to gauge the economics of the project.

Further intercepts from near-surface drilling released this week add to the growing list of promising drill results at Raska.

At the Kizevak prospect, drilling continues to verify and expand the existing mineralised zones whilst demonstrating continuity of mineralisation.

Previous results from Kizevak did not disappoint either with several wide intercepts reported, including a mouth-watering 53m hit going 4.2 per cent zinc, 2 per cent lead, 21 g/t silver and 0.4 g/t gold from 100m.

Further drilling at Kizevak will continue to target extensions along strike and down dip.

At the Sastavci prospect, the company continues to define thick mineralised zones at the base of the historic mining operation. Numerous sub-parallel vein zones outside of the old workings have also been identified.

The latest results add to the previously reported intercepts which intriguingly also include the discovery of a mineralised gold zone at the prospect. A 31m hit going 1.3 g/t gold from 279m, including 1.0m at 13.6 g/t gold was previously reported by Adriatic. Other head-turning intercepts include a broad 45m interval at 3.3 per cent zinc, 1.0 per cent lead, 17 g/t silver and 0.2 g/t gold from just 17m depth.

Adriatic is planning a further 4,000m of drilling at Sastavci along strike to the two main mineralised zones and is looking to also test near-by sub-parallel structures identified through target-generation works.

Whilst the company’s focus remains on delineating near-surface resources amenable to low-cost open-pit mining at Kizevak and Sastavci, the company is also looking to identify new mineralised zones within the project tenure. A third rig is due to smash out more metres next month, initially targeting the Karadak and Rudnica epithermal vein prospects.

Some 2,200m of drilling is planned for Karadak where a historical non-compliant silver-zinc-lead resource is present. A further 1,500m will be drilled at the Rudnica prospect hosting two outcropping copper-gold mineralised porphyry centres in addition to a 1.5 kilometre long geochemical and geophysical anomaly. Of note, Adriatic reports that historical drilling results at Rudnica include a whopping 567m interval at 0.3 per cent copper and 0.45 g/t gold from surface.

As the rods continue to turn in Serbia in anticipation of a maiden resource update and scoping study later in the year, Adriatic is showing no signs of stopping to take a breath.