What future for traditional websites?

The evolution of mobile technology has been so rapid that the web may be left behind. 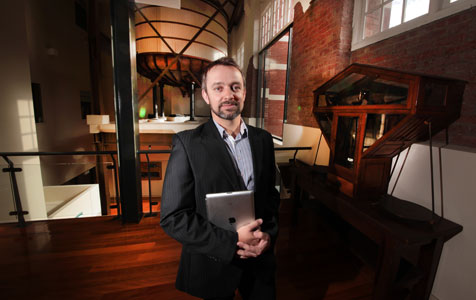 NOT FOR EVERYONE: Marc Loveridge takes a pragmatic approach to the development of business apps.

The evolution of mobile technology has been so rapid that the web may be left behind.

TWENTY years ago the inventor of the world wide web, Tim Berners-Lee, famously flicked the switch that gave away his creation for free.

Initially, this meant developers the world over could put up their own web pages and help develop the network together. In this way, the web grew beyond even its inventor’s vision.

Web businesses emerged all over the globe in the years following, leading to the first dot.com boom.

By the turn of the century many businesses had realised the value and importance of a web presence, preferably their own web site. Most were little more than ‘brochure sites’ (online brochures showing off the wares of the company, with an ‘about us’ and ‘contact us’ page). Many still are.

And with technology being created and evolving at such a rapid pace, herein lies the problem.

In little more than a decade, the emergence of mobile technology has driven a significant shift in user habits. We now have mobile-enabled websites and apps on our smartphones and tablets, and are visiting ‘traditional’ web sites less and less.

People are increasingly using apps on their mobile devices (facebook, Candy Crush, Shazaam, Foursquare, Evernote, TuneIn Radio, Instagram etc) in preference to ever visiting its website equivalent. The app is better, faster and we do it on the go.

Apps are there on your phone or tablet – push a button and up they come. No loading of web pages, no typing of web addresses. Easy.

You engage with these apps in a more personal manner, through touch, swipe and tilt; they can even work offline.

So what does this mean for the future of websites?

Marc Loveridge, director of local app developer Adapptor, believes the tipping point in the US was as far back as June 2011, when time spent per day using apps (81 minutes) first surpassed time spent accessing the web from a desktop or laptop (74 minutes).

“With smart phone penetration slightly higher here (79 per cent) than in the US (78 per cent) the trend towards apps is probably happening in Australia,” Mr Loveridge told Business News.

However he doesn’t see mobile applications as a make or break for all businesses.

“Clients often come to us with a mobile concept in mind, which leads to both an app project and a web project,” Mr Loveridge said.

“(However) there are many types of business that have no real need for an app. Small businesses in mature industries that serve a small local group of customers should probably avoid investing in mobile app development.”

Founder of app developer Ingenius Labs, Stuart Kidd, doesn’t think websites will be totally replaced any time soon, but sees their failure to change with the times as a pointer to their fate.

“Each time a new hardware function becomes available on a mobile device it’s another stab in the heart to a website,” Mr Kidd said.

In terms of app development, he said if the right (app) idea was put to use for the business so that it could get a return on investment and customer loyalty, then why not?

“Even though there are hundreds of thousands of apps, there are plenty of fresh ideas,” Mr Kidd said. “It’s just a matter of picking out the right idea to match and be willing to take a small leap of faith in a relatively new technology.”

Filter Squad founder Dave McKinney, who built the Discovr music app from his office in Shenton Park (3 million downloads and counting), believes both have their place

“The web will always be important,” he said. “Mobile and web are just different media for different time and places.”

In terms of cost, there’s broad agreement that you get what you pay for when it comes to app development.

“There are companies that can enable you to make good quality apps for less than $1,000, although custom development work will always be expensive,” Mr McKinney said.

Customised app prices among Perth-based developers started at about $10,000 and quickly rose to $40,000 or beyond.

For businesses unsure whether they need an app, a good place to start might be to see how your web site looks on a mobile device. From there, the possibility of an app might develop – or not.