Wanted: a love of the business and good communication skills

Traditional continental delis with a wide variety of cheese on offer, dozens of different cold meats and an Aladdin's cave of exotic imported products, are not so common in Perth anymore. 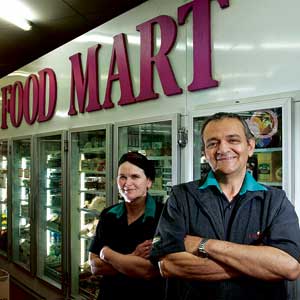 STYLE: Mel and Marie Tindiglia are among the surviving continental deli operators in Perth and rely heavily on input from family.

Traditional continental delis with a wide variety of cheese on offer, dozens of different cold meats and an Aladdin's cave of exotic imported products, are not so common in Perth anymore.

Those still in the business agree that numbers are diminishing because of the pressure from the major supermarket chains on one hand, matched by a lack of passion to take on the lifestyle on the other.

As the supermarkets have responded to consumer demand for gourmet products by growing their smallgoods offerings, traditional continental corner delis have had to work hard to keep their customers.

The Italian delis that have managed to survive this changing retail landscape over the years have a commitment to providing a point of difference, and building relationships with customers.

Among those to prosper in difficult times is Mount Lawley continental deli, Antonio's, which supplies some of Perth's top eateries and is a popular destination for local shoppers.

It seems customers enjoy a good prosciutto as much as the first-name terms their relationship with owners Mel and Marie Tindiglia allows.

Antonio's is located in a tiny shopping arcade without any significant signage on the main strip, Beaufort Street, and is near an IGA, which has a well-exposed spot right on the corner.

While Antonio's made its mark by stocking a large range of products, others such as Charlies in Morley have established themselves by growing their size to supermarket-like dimensions, while venues like Victoria Park's 868 Gourmet opted for a modern take on the traditional deli by attaching a funky cafe to the smallgoods operation.

Mr Tindiglia says he stocks products exclusive to the area for a certain clientele and if IGA's got it, he doesn't want it.

"You've got to know which companies [wholesale] to deal with; if they go next door, I tell them, 'if you sell to them don't sell to me, because you can't compete with IGA, they've got the buying power'," he told Gusto.

"Price isn't an issue here because people are prepared to pay for quality and a lot of the stuff here can be quite pricey, but what you pay for is what you get."

As successful as the remaining continental delis in Perth are, it seems like each of them will remain family run, owner-operated businesses.

The Tindiglias' daughter, Donna, helps out, while Charlies owner Charlie Tricoli has his three sons and one daughter running the show with him.

868 Gourmet owner Livio Maggi says the family element has been important to the success of his business too.

"We're family and friends orientated; my mum used to come down to the shop...it is that sort of thing people appreciate when they go to a gourmet deli," he says.

The traditional model of the continental deli - open 12 hours a day, seven days a week - certainly helped operators to retain customers, but they agree the art of offering unique products fancied by customers across the board, as well creating relationships with their clients, had made the difference for those operators willing to make that extra effort.

"To run two delis is not easy, it's long hours, seven days a week, and even if you're not there you have to have the control," Mr Tricoli says.

"We've got this one [Charlies] and I've got my three sons with me, but seven days a week for one person is very hard. I did it for over 30 years.

"There are only a couple of delis left now; to survive you have to expand, to build on."

After operating 868 Gourmet in Victoria Park for six years, Mr Maggi is looking to sell the business, but he says the seven-day model is not attractive to potential buyers.

"There has been interest but it's hard to sell a business open seven days a week; we are closing on Sundays as of July 1 and will put it back on the market," he says.

All those spoken to by Gusto agree that passion is the main attribute an owner can bring to the business.

Mel and Marie Tindiglia are two former teachers who retired 11 years ago to dedicate themselves to their all-time passion, food.

"I've lost all my holidays from teaching, my long-service leave and I'm not sorry for it," Mr Tindiglia says.