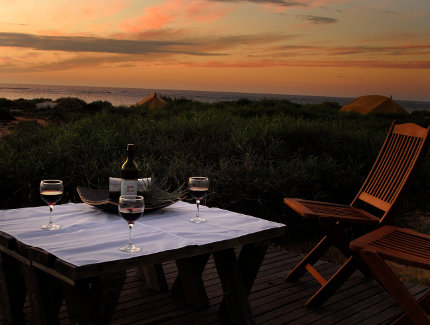 Yallingup's Cape Lodge located adjacent to the Margaret River wine region, Stonebarn in the sprawling forests of Pemberton and Ningaloo Reef's safari camp, Sal Salis Ningaloo Reef all made the grade appearing alongside some of the nation's, and New Zealand's, most unique and interesting boutique offerings.

Cape Lodge, owned by Peter Larsen, was also voted Luxury Travel Magazine's Best Boutique Hotel in Australia 2009 and listed as one of the "World's Best 100 Hotels" 2010 as well as being a member of the Small Luxury Hotels of the World.

Sal Salis features on the front cover of the new publication and is owned by Charles Carlow and Stewart Cranswick from the Wild Bush Luxury group which manage four eco-style properties across Australia, three of which appear in the book.

Sal Salis is an isolated eco-friendly camp with five wilderness tents in the Cape Range National Park with no mobile phones, televisions or internet connectivity.

Interestingly, each of the properties was anonymously reviewed by well-known names from the worlds of fashion, theatre, design, food and wine, including actor Sigrid Thornton, chefs Christine Manfield and Andrew McConnell, and television personality Deborah Hutton.

Preceeding editions of the publication have covered European cities, European coastal and country properties and two best-selling guides to boutique hotels in the UK and Ireland, as well as worldwide survey, The Global Shortlist.

"What we think Mr & Mrs Smith does better than any other travel guide in the world is identify the wow-factor that brings boutique to life," Mr Westcott said.

"We look for a breathtaking location, incredible food and wine, unique spa and beauty treatments, or just the old-world charm of a remote and beautifully restored homestead."

Each book comes with an exclusive membership card worth $25, entitling users to upgrades, discounts, tempting on-arrival gifts and other life-enhancing extras.