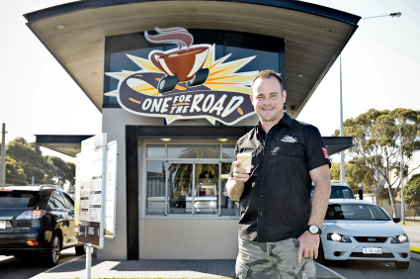 The ownership of a Perth-founded coffee chain has moved east after Queensland company Zarraffa’s Franchising acquired One for the Road.

The drive-thru chain, which has four stores in Perth and one in Kalgoorlie, will be rebranded as part of the Queensland company before the year’s end.

One for the Road was founded by Perth property developer Scott Paterson in 2006. He said six years on, the time had come to sell the business.

“One for the Road was at a stage where it needed massive footprints and a level of drive and experience that I had identified in Zarraffa’s,” Mr Paterson said.

Mr Campbell said Zarraffa’s would not rebrand the newly acquired stores until later in the year, after the company had become familiar with the local market.

All One for the Road staff will be retained and the stores will initially be run as corporate stores.

“Eventually we will seek out franchisees for the sites but our commitment is to understand the market, transition our products and services to the stores and deliver exceptional, convenient coffee to each locale,” Mr Campbell said.

Trading as Zarraffa’s Coffee, the Queensland business operates 52 drive thru coffee stores on the east coast.