Great Southern Mining has secured up to $150,000 of co-funding support from the WA Government for RC drilling on the various nickel-cobalt-scandium targets at its Mt Weld project near Laverton. This is timely given the ongoing trade war between China and the US that has sent shares in Lynas Corporation, who operates the neighbouring Mt Weld rare earth mine, sky-rocketing more than 80% since late March. 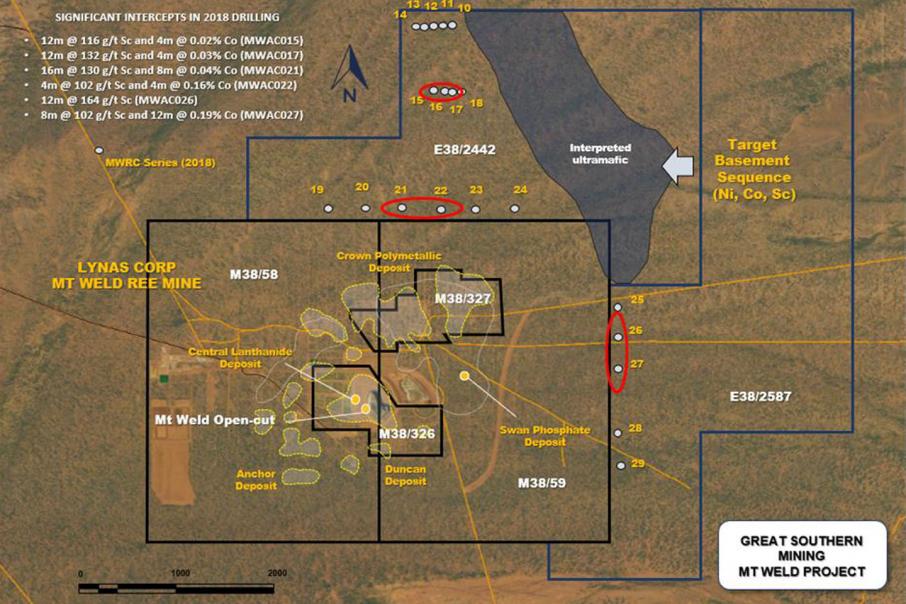 Great Southern Mining has received a boost from the Western Australian Government after securing up to $150,000 worth of co-funding under the Exploration Incentive Scheme for drilling at its promising Mt Weld project near Laverton.

Funding will be used to carry out RC drilling on the various nickel-cobalt-scandium targets generated by its 2018 drilling campaign including an untested ultramafic complex.

This previous drilling returned results of up to 12 metres grading 0.19% cobalt from 56m down-hole and 16m at 130g/t scandium from 38m down-hole in separate holes with individual peak assays from 4m composites intersecting 0.35% cobalt and 252g/t scandium.

The co-funding support could not be timelier, given the ongoing trade war between China and the US.

China is widely expected to cut its supplies of rare earth minerals, with which scandium is generally lumped, to the US rather than increasing tariffs.

Australian rare earths producer Lynas Corporation, whose Mt Weld mine is adjacent to Great Southern’s exploration tenement, has been a major beneficiary of this dispute with its shares rising 84.2% since 25 March 2019 to the current price of $2.865.

Scandium is a master alloying metal, with only small quantities needed to increase the strength and thermal and corrosion resistance of certain lightweight materials, particularly for military applications and the aerospace and automobile industries.

Current total global supply of scandium oxide is estimated to be between just five and fifteen tonnes per annum, all of which is sourced as a by-product from the processing of other base metals, particularly nickel.

Great Southern Mining Executive Chairman John Terpu said: “This funding will provide the company the opportunity to increase …exploration of the extent of mineralisation (for) this encouraging deposit.”

“Being so close to Mt Weld and with significant infrastructure space and exceptional targets provide the company with the ability to test these targets and continue to execute our strategy to add value through discoveries.”

While previous explorers were focused on rare earth mineralisation similar to Lynas’ Mt Weld mining operation, a review and interpretation of historical drilling and open file data by Great Southern has shown zones of cobalt and scandium enrichment in a thick laterite profile across its project.

Great Southern said that the scandium mineralisation occurs as a “blanket” of residual or supergene enrichment within the mineralised laterite profile, that may or may not be coincident with a zone enriched in cobalt.

The company has identified continuous mineralisation over at least 1km long in both north-south and east-west drill lines, with potential to expand these and also close up drill patterns over the thicker or higher-grade intercepts for mineral resource definition purposes.

Exploration at Mt Weld is still at its early stages, but the West Australian Government’s co-funding support will help underpin the company’s efforts to delineate commercial quantities of the valuable cobalt and scandium.

Success could be a game changer for Great Southern given the growing awareness about the value of securing supplies of valuable, scarce commodities such as rare earths.