Tony Abbott and his team appear to have no ability to deal with the mire they have sunk into. 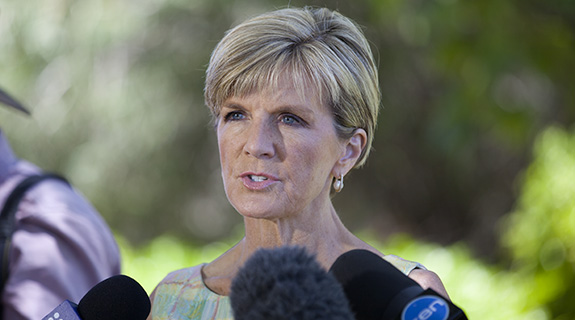 Tony Abbott and his team appear to have no ability to deal with the mire they have sunk into.

The Tony Abbott-led government has slumped into a twilight phase.

The main reason for delay of a coup de grace is because his two successor hopefuls – former party leader, Malcolm Turnbull, and his and Mr Abbott’s deputy, Julie Bishop – lack broad party room support because they don’t inspire confidence.

Like Mr Abbott, each has a black mark alongside their name. And both are identified with their party’s left-liberal set.

Under their joint leadership, the Liberals were moving towards becoming a pale image of Kevin Rudd-led Labor.

Mr Bishop’s current poll ratings as foreign minister are seen be due to her ongoing photo opportunities alongside international figures rather than any vision she may have that instils confidence in her succeeding in Australia’s top job.

All up this spells disaster; a real and not fully understood leadership crisis, since the Liberals lack credible long-term replacements.

Clearly, various aspects of this problem will require closer consideration by this column over coming months.

However the question that now needs answering is why Mr Abbott has been failing.

Undoubtedly a case can be made that he’s victim of misfortune.

But should this be viewed as mere misfortune, or something that Mr Abbott and his team failed to thoroughly assess well ahead of election 2013?

Coalition MPs – not just Mr Abbott – dismally failed throughout 2008 to 2013 to fundamentally evaluate problems and devise solutions for their return to the government benches.

Instead, they sat on their hands and seem to have been in a kind of time warp, believing the conditions they would inherit upon their return to power would be a re-run of late 2007, when Labor replaced John Howard’s long-serving government.

However, Australia in September 2013 was fundamentally different to 2007.

That was obvious to many.

Yet coalition MPs wouldn’t confront the reality that easier times – growing revenues derived from quarrying iron ore and coal – would taper-off and that there would arise a need for tough decisions on size of government and, more important of all, national debt.

Evidence of this is Mr Abbott’s unveiling (from opposition mind you) of a costly paid parental scheme and repeated assurances discounting the need for spending cuts when the coalition regained government.

Why didn’t he and his financial colleagues – Joe Hockey and Mathias Cormann – issue precise and repeated declarations about the ‘end of entitlement’ then, rather than on the eve of last May’s budget?

Why wasn’t the public warned of the looming end of the mining boom, during which Labor squandered billions?

To have waited until handing down the first budget –eight months after winning the 2013 election – was too little too late, especially when another misfortune was always likely in the form of a hostile Senate.

Last week, Shanghai-based former Asia-Pacific chief Morgan Stanley economist, Andy Xie, said in relation to iron ore prices: “When it peaked at $US190, I started talking about a collapse and nobody believed me.

“We need to see prices much, much lower.

“It can still go down through $US40 before we bounce back.”

Why weren’t the coalition’s upper echelons unambiguously and repeatedly warning of coming price falls in these two major earners of foreign exchange?

That failure to prepare the public, Labor’s squandering proclivities, promising of new costly programs, and failure to warn of the need for cutbacks combined to create what’s now obviously a deadly brew – one Mr Abbott finds he’s unable to grapple with.

According to a South Australian contact the Abbott, Turnbull or Bishop-led Liberals look set to repeat what occurred in his state after 1992, when Labor’s John Bannon resigned following his $3.15 billion State Bank collapse.

Like Mr Abbott now, Mr Brown never fully capitalised on his 27-seat majority and was replaced in 1996 by long-time rival, John Olsen.

Even though Mr Oslen remained premier until 2001, followed briefly by Rob Kerin, the Liberals failed to consolidate in voters’ minds that they were worthy of governance.

However, Labor, despite Mr Bannon’s SA Inc debacle, did that under Mike Rann who’d reached Adelaide from New Zealand in 1977, worked for Labor premiers Don Dunstan, Des Corcoran and Mr Bannon, after which he entered parliament and won three elections.

And Labor is still in power.

Get ready, Australia, for tougher times lie ahead.