Voelte to get more than BHP, Rio bosses 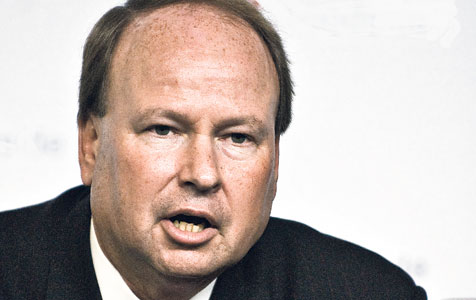 The new-found restraint characterising chief executive salaries has not extended to Kerry Stokes’ Seven Group Holdings, which has announced that new boss Don Voelte could earn $7.2 million each year.

Seven Group, which announced last week that it would be cutting 350 jobs at its WesTrac operations in NSW, has agreed a salary package that would make Mr Voelte one of the highest paid chief executives in the country.

In addition, he will be paid a further $2.4 million in cash and shares under a short-term incentive plan if his annual performance is "on target".

Mr Voelte may also qualify for $1.6 million in share options under a long-term incentive scheme, if his performance is "on target".

His base salary is similar to that paid to his predecessor, Peter Gammell, who was on a base salary of $3.0 million.

However, Mr Voelte's base pay is far above that agreed by BHP Billiton and Rio Tinto this year.

New BHP chief executive Andrew Mackenzie will be paid a base salary of $US1.7 million ($A1.9 million) plus a pension (superannuation) of 25 per cent.

Rio chief executive Sam Walsh is paid a base salary of $A1.9 million.

When BHP chairman Jac Nasser announced Mr Mackenzie's package in April, he famously remarked that "some downward rebasing at this time is appropriate".

Since then, many small and mid-cap companies have annoucned cuts to staff salaries and directors' fees.

Just last week, Troy Resources announced that chief executive Paul Benson's $540,000 base salary would be cut by 25 per cent.

The total amount paid to chief executives is dependent on their performance relative to agreed targets, which are not made public.

Rio's Mr Walsh may end up getting more than Mr Voelte if he achieves defined performance targets; Rio stated that Mr Walsh's "total target reumeration" is $A7.8 million.

His predecessor Marius Kloppers had a larger base salary and higher incentive opportunities.

To provide further context, Seven Group Holdings has a market value of just $2.5 billion, making it the 88th largest company on the ASX.

The highest-paid chief executive in WA is Wesfarmers boss Richard Goyder. Last financial year he had a base salary of $3.3 million and total income of $8.0 million.

Wesfarmers has a market cap of $46 billion and is Australia's 8th largest company.

Prior to taking his current role, Mr Voelte was chief executive at Seven West Media, with an annual salary of $2.6 million and no variable remuneration.

Before that, he was chief executive at Woodside Petroleum. In his final year at Woodside, he was paid a base salary of $2.6 million and total income of $7.9 million.