A fourth-generation winemaker has launched a new cafe concept focused on matching Swan Valley wines with some of the world’s best cheeses. Shanna Crispin reports. 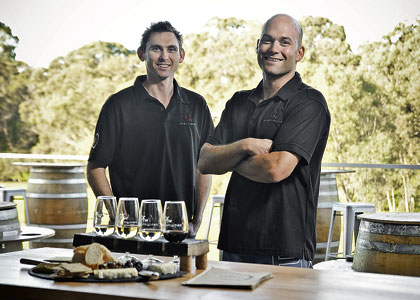 A fourth-generation winemaker has launched a new cafe concept focused on matching Swan Valley wines with some of the world’s best cheeses. Shanna Crispin reports.

JUST off the Great Eastern Highway in the Swan Valley, Anthony Yurisich sits on the deck of his recently opened cheese cafe, The Cheese Barrel.

It’s a typical spring afternoon and the Olive Farm Wine’s fourth generation owner and winemaker arranges a selection of Australian and French cheeses on the table before him.

Each cheese is deliberately matched to one of the 25 wines made in the Olive Farm winery just next door.

“I always thought you just got a hunk of cheese and some wine and got stuck into it,” Mr Yurisich told Gusto.

“But when you find the matching ones and enjoy them together, it just takes you to a completely different sensory level.”

It’s a setting almost too cliched to be true; and Mr Yurisich is concerned it could ultimately be just that - too good to be true - if the state government doesn’t prevent wineries such as his being sold off and subdivided.

“The Swan Valley is one of the top five tourist destinations in the area and the appeal is that you can’t see a house, you can’t hear a train,” Mr Yurisich says.

“If a sub-division does come in, our vistas are stuffed, basically, and the appeal of the valley will be lost.”

Mr Yurisich is part of the Swan Wiley executive committee, which is lobbying the government to protect the agricultural and tourism appeal of the region.

Planning Minister John Day last week launched a discussion paper to ascertain local landowners and business operators’ thoughts on the future of the Swan Valley - particularly with regard to support for agriculture and tourism planning.

Mr Yurisich believes the valley’s viticulture and other agricultural ventures will be jeopardised if the government allows the subdivision of land to accommodate the expansion of Perth.

“Subdivision is an easy way to make some killer money,” he says.

“In the eastern corridor (of the valley) there are a lot of big properties with ageing owners and children who don’t want to take the business on.”

David Mullender, who has joined the Olive Farm Wines business as manager of The Cheese Barrel, agrees the valley should be protected.

“If the third-generation families want to sell up and the fourth generation doesn’t want to take it on, then the government needs to talk with them to come up with a good way of acquiring the land so it can be used for viticulture and agriculture,” Mr Mullender says.

Initially established in South Guildford and taken over by the Yurisich family in 1933, Olive Farm Wines has faced the threat of encroachment before.

In 2005, the family took the decision to move and start anew in the Swan Valley.

“Where we were there was just a bit of urban sprawl encroaching on us,” Mr Yurisich says.

“And the business had become too big; we had 30 staff on the books and it was a seven-day s-a-week job, which was really taking a toll on my parents’ lifestyle.

“It was a pretty big decision to pull up stumps and move, but looking back it was the best decision we’ve ever made; we’ve been able to scale down but increase our focus on the wines.”

Opening The Cheese Barrel less than two months ago was a further attempt to expand the Olive Farm Wines business; and it’s a venture Mr Yurisich hopes will double turnover in the

“That’s what we’re aiming for; already there’s been a huge increase in the number of people coming to the cellar door who initially came in for the cheese,” Mr Yurisich says.

Mr Mullender was taken on to set up and manage the cafe in February this year, which he says is a concept unlike anything seen in Australia, let alone the Swan Villey.

“We wanted to showcase cheese from around the world; we have a lot of local cheese producers but we don’t have anywhere that showcases benchmark cheese, especially in a place where you can sit down and enjoy them with a glass of wine,” Mr Mullender says.

A selection of 30 different cheeses is imported from France, Italy and Spain, as well as some of the best from Australia.

Mr Yurisich says the idea of sitting down for just wine and cheese is growing in popularity and will be of benefit to others in the valley.