Venus Metals has stitched up options with both the plaintiff and the plainted at the historical Younami gold mine, 250km west of Leonora. The transactions will cost less than A$6m in a mix of cash and shares and will guarantee that Venus emerges the victor in a legal dispute that it is not actually a party to. Hundreds of thousands of ounces were left in the ground when the mine was closed in 1997. 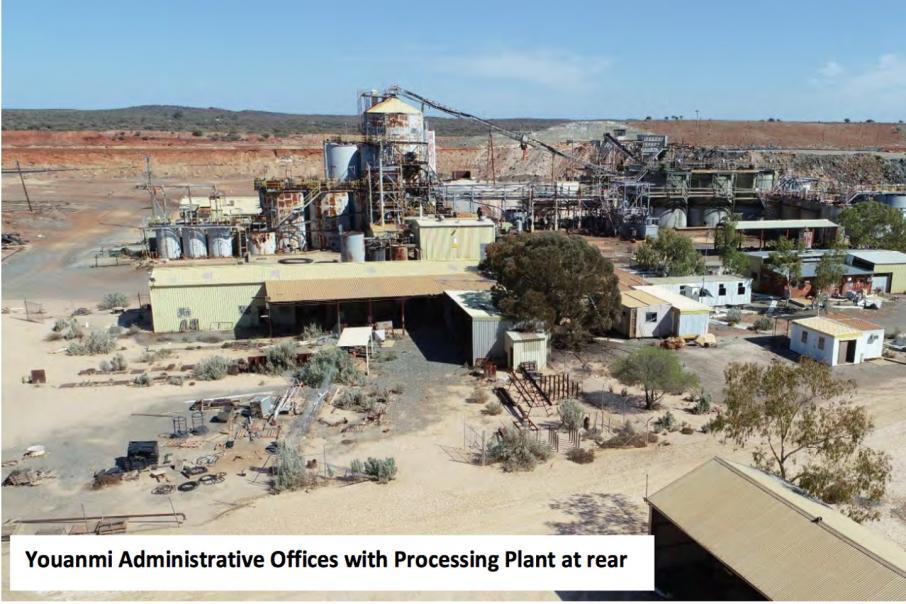 Instead of waiting on the sidelines to see which party is ultimately successful in a plainting dispute, Venus Metals has swooped on the historic, gold rich Youanmi mining assets 250km west of Leonora, by pulling together a deal with both parties.

In an emerging trend, Venus will attempt to resurrect the unloved and overlooked high-grade deposits at Younami, which produced nearly 700,000 ounces of gold grading 5.42g/t gold, before mining ceased in 1997.

In the intervening period, the gold price has more than quadrupled from AUD$400 per ounce to AUD$1760 per ounce today, potentially transforming the economic outlook for the project that was mothballed in the 90’s with hundreds of thousands of unmined ounces still in the ground.

When the mine closed in 1997, the underground workings had reached 620m and the processing plant and supporting infrastructure was simply put onto care and maintenance and still exists on site today.

Since then, ownership of the project has bounced around a bit, with exploration continuing, but with a flood of historic projects being kicked back into gear lately, Youanmi is now being fought over with Venus looking like being the eventual victor.

The company already holds nearly 55 square kilometres of exploration ground across 11 mining tenements that completely straddle the existing Youanmi project leases. The acquisition of the central project is the final piece of the puzzle for Venus Metals and it has the potential to be a million ounce plus company maker for it.

Sprinkle in some encouraging results from Venus’ recent heliborne electromagnetic survey results that turned up 8 very strong, high-priority regional exploration gold targets just 10km south of the Youanmi mine and the stars start to align for the ASX listed small cap company.

Given that the gold targets sit on the prospective Youanmi shear zone with the Youanmi assets to the north and the Penny West gold mine that produced 150,000 ounces at 22g/t gold to the south, it remains a mystery as to why no one else has stitched the story together sooner.

Venus Metals’ Managing Director Matt Hogan said: “This deal for Venus is transformational because we stand to acquire a large, high grade established gold resource base to complement our extensive exploration holdings at the Youanmi greenstone belt.”

The remnant near-surface mineral resources of 5.2 million tonnes grading 1.5g/t gold for another 246,000 ounces are not yet JORC 2012-compliant, but Venus is quietly confident that the historical results can be replicated based on recent work undertaken.

Venus has jumped the pack to stitch together what looks to be a sublime deal with both the owner of the Youanmi assets and the company that plainted them for alleged inaction on the leases.

Venus has now hedged its bets by entering into two option agreements with two private companies, one with the current tenement holder, Oz Youanmi Gold Pty Ltd and one with St Clair Resources Pty Ltd, who lodged a forfeiture application or “plaint” against Oz Youanmi in the Warden’s Court back in 2016.

If the plaint against Oz Youanmi by St Clair was successful, all plainted mining leases would then transfer to the latter party, however, if it is unsuccessful, then Oz Younami would retain its title to the tenements that underpin the project.

Under the terms of the three way deal that will see all parties get something, Venus has an option to pay Oz Youanmi A$5m in cash or AUD$3m in shares and AUD$2m in cash at Venus’ election.

Venus will then acquire all shares in Oz Youanmi Pty Ltd which will then see it hold effective ownership of the project, complete with all in-ground ounces, technical information, the mothballed plant and supporting workers village.

Oz Youanmi shareholders will also retain a royalty of 0.5% for gold sold above USD$900 per troy ounce from the mine.

The plaintiff, St Clair Resources, has granted Venus an option to demand the plaint be withdrawn for an initial fee of $100,000, to be extended by a further $50,000 if the option is not exercised before the end of 2018.

This deal then requires St Clair to withdraw the forfeiture applications over the Youanmi mining licences for which St Clair will pick up another $650,000 and a royalty of 0.3% for gold sold above USD$900 per troy ounce from the project.

Elsewhere, Venus is sitting on a massive array of interesting looking multi-mineral projects throughout W.A.

These include projects that contain copper-zinc mineralisation, cobalt-nickel-copper-PGM mineralisation and a JORC-compliant vanadium-titanium resource within a banded iron formation sequence at the Youanmi vanadium project.

The company also has other gold projects and is knee deep in the battery minerals sector with some prospective looking lithium-tantalum ground holdings in the Pilbara, the Murchison and east of the famed Greenbushes lithium mine in the southwest of W.A.

A JORC-compliant magnetite iron ore asset southeast of Yalgoo in the Mid West region rounds out the portfolio.

For now though, it’s all shoulders to the wheel for Venus at the Youanmi gold project, where the company will commence an extensive review of the historical drilling database.

The former operators at Youanmi dug five separate open pits and Venus now has an aspirational target of joining them all together in one “super pit” , aided and abetted by the historically high gold price.

Now that Venus has its foot on the entire project and surrounding tenements the number of different options for the company are dizzying.

They range from processing the substantial pile of old tailings, to mining the underground ounces to digging one big super-pit at surface.

Importantly, the company has also identified a number of solid looking exploration targets in the region.

Whilst the mill will no doubt need a serious scrub up, the advantage it offers really sets the project apart from many others that have no infrastructure and actual mining is just a pipe dream for them.

That is perhaps not the case for Venus Minerals.