Venus kicks off EM survey at WA base metals play

Venus Metals has commenced a high-powered, EM geophysical survey at its Vidure copper-nickel prospect, located near the ever-popular Youanmi region in WA, where historical drilling by WMC and BHP outlined anomalous base metal and silver mineralisation. The survey will penetrate up to 500m, where the company previously interpreted poorly constrained, down-dip and down-plunge extensions to the defined mineralisation. 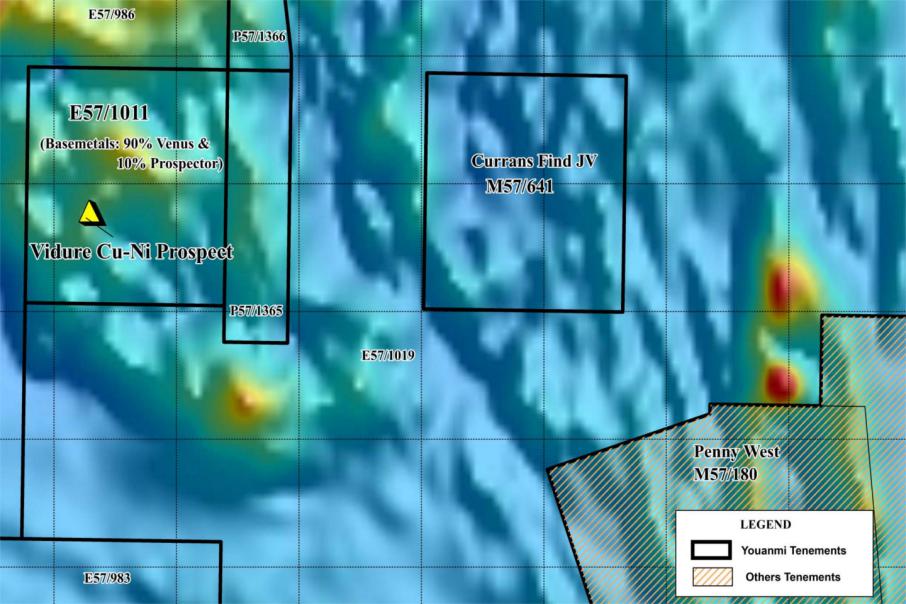 Multi-commodity exploration company, Venus Metals, has kicked off a high-powered, electromagnetic geophysical survey at its Vidure copper-nickel prospect, located near the ever-popular Youanmi region in WA.

The prospect forms part of the company’s Youanmi base metals project and sits within its much broader Youanmi tenement holdings.

This district contains a variety of different mineralisation styles and commodity occurrences including gold, silver, copper-zinc, titanium-vanadium and nickel-copper-PGMs.

The Vidure base metals prospect was discovered by WMC back in 1973, with a historical drill hole unearthing massive sulphide mineralisation in a 1.22-metre wide intersection that assayed 2.2% nickel and 0.14% copper from 135m down-hole.

This combination of metallic mineralisation means that Vidure could potentially contain different styles of ore bodies including intrusion-related mafic sequences or perhaps even volcanogenic-hosted massive sulphide mineralisation, such as Sandfire’s DeGrussa mine and Venturex’s Sulphur Springs project in the Pilbara.

The current EM survey follows up on historical surveys in the area, but will be able to penetrate much deeper to around 500 metres, Venus said.

This is handy because the deep targets at Vidure are poorly defined at present.

The potential down-dip and down-plunge extensions to the defined mineralisation were first interpreted by the company, nearly four years ago.

The new survey will take approximately one week to complete, with results to be modelled by Venus’ consultant geophysicists with a view to generating some attractive RC drilling targets for the prospect.

The prospect is located only 3.5km west of the company’s encouraging recent gold exploration at Currans Find North with JV partner, Rox Resources and about 25km south-southwest of the historical Youanmi gold mine, now owned jointly by Venus and Rox.

Venus has plenty of balls in the air right now and recently sold down its 50% stake in a magnetite iron ore project near Yalgoo in WA to focus more on its Youanmi package.

It also recently optioned out its Nardoo lithium project in the Gascoyne region, placing some money in the kitty to concentrate on its core projects elsewhere.