Venus Metals has continued to rack up high-grade gold hits along the down-plunge extension of the Link target at its joint-ventured Youanmi gold project near Mount Magnet in WA’s Goldfields region. One of the best assays from the latest batch of RC drill results returned 4m at 7.2 g/t gold from 131m. Another notable hit at Link was 4m at 2.7 g/t gold from 164m downhole. 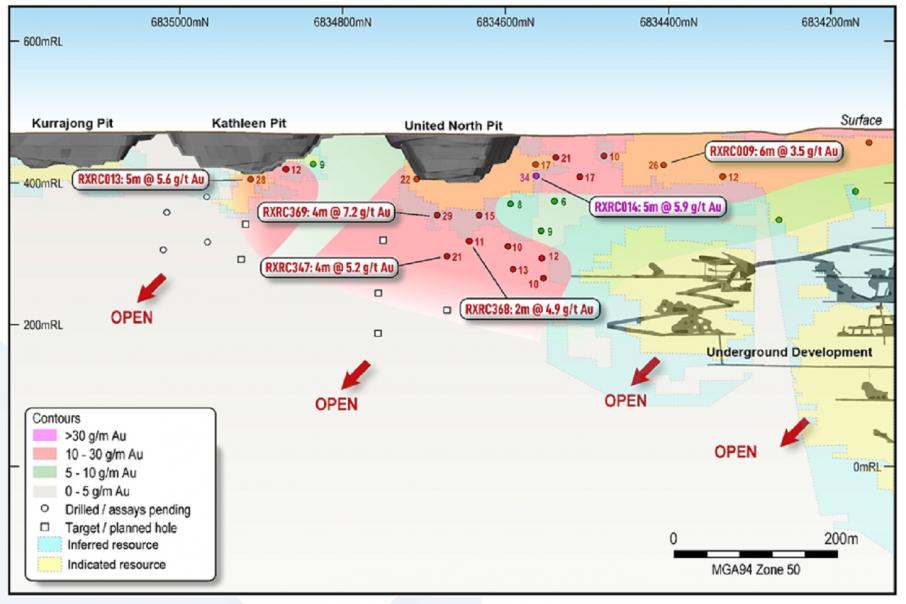 ASX-listed gold and nickel explorer, Venus Metals has continued to rack up high-grade gold hits along the down-plunge extension of the Link target at its joint-ventured Youanmi gold project near Mount Magnet in WA’s Goldfields region.

One of the best assays from the latest batch of reverse circulation, or “RC”, drill results was 4m at 7.2 grams per tonne gold from 131m.  The highlight of the round included a rich 2m interval which graded 12.6 g/t from 131m.

A third intercept returned 1m at 5.2 g/t gold from a relatively deep 220m below surface.

RC drilling continues to extend the known area of high-grade mineralisation at Link that sits 100m beneath the historical United North pit.

Interestingly, the results received this week extend the known area of high-grade mineralisation at Link to within 150m of Youanmi’s existing underground development infrastructure.

The company said the current RC drill program followed up on recent high-grade gold intercepts at the Link and Junction targets and the Grace deposit where recent RC drilling uncovered a stellar 8m intersection at an average grade of 19.9 grams per tonne gold from 68m including 4m at an even more impressive 38.3 g/t from 68m.

Rox Resources Managing Director, Alex Passmore said: "We are pleased to report these near mine extensional drill results from Youanmi. The structural targets down plunge of historic pits that comprise Link are close to historic mine development and have the potential to add to mineable inventory for relatively low cost. We look forward to updating the market as more results come to hand.”

A string of small historical gold mining pits trend northward from Youanmi’s largest central open pit mine and are known as United, Rebel, Kathleen and Kurrajong.  The JV’s current exploration model is looking to the down-plunge extensions of the high-grade ore shoots previously mined in those northern pits and in the historical Hill End Deeps underground mine.

The JV is looking to delineate and extend the high-grade ore shoots at Grace, Link and Junction with the aim of working up some further targets for testing in an upcoming diamond core drilling program.

Whilst much of the recent RC drilling activity has been focussed on Link and Grace, the Junction prospect has also returned some solid numbers including intercepts of 4m grading 6 g/t from 84m and 8m at 4.1 g/t from 112m in the latest round of RC drilling.

Venus says the latest round of successful drilling will likely lead to a refreshed mineral resource estimate for the project, a subsequent definitive feasibility study and an optimised development plan for the old Youanmi mining area.

According to the company, mining of the historical Pollard lode way back in the 1930’s extracted dirt containing over 250,000 ounces of gold from a mined grade of 15 grams per tonne gold.

The Youanmi project near Mount Magnet, approximately 80km south-south-west of Sandstone, is 70 per cent owned and operated by Rox Resources and 30 per cent held by Venus.