Varsity takes its bar to the ’burbs

Ben Maher and his partners are taking their successful Nedlands bar concept to the university precinct near Curtin. 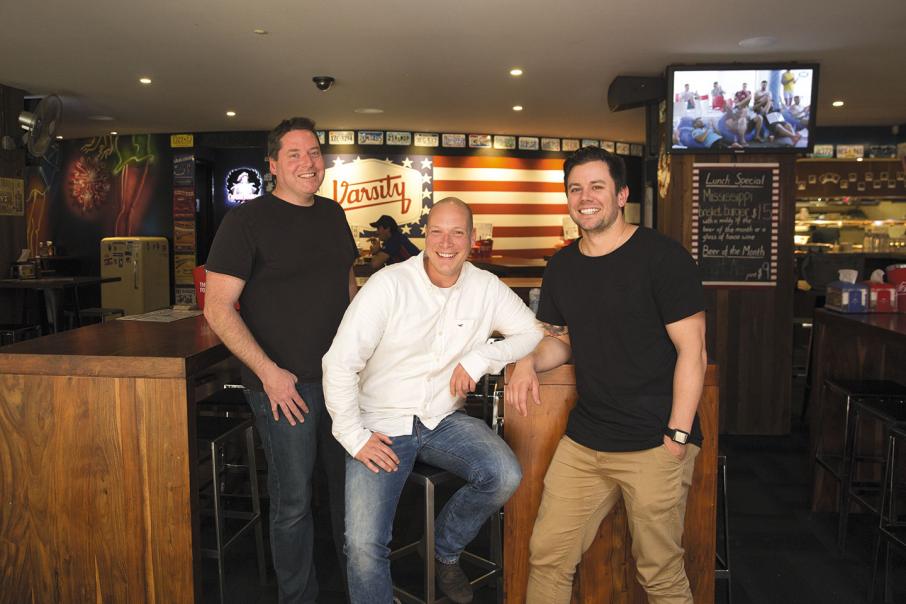 Ben Maher and his partners are taking their successful Nedlands bar concept to the university precinct near Curtin.

Ben Maher’s hospitality experience comes from years working in his family’s businesses across a range of venues familiar to Perth consumers.

Yet even he acknowledges there was much to learn from his younger partners in their Nedlands bar venture – Matt Pound and Fabian Bucher – who he said had made a big difference to the success of the business, from operations through to promotion via social media.

Perhaps it makes sense that Mr Maher found he could still learn new things in his line of business, given the venue is called Varsity Bar and has a considerable student clientele due to its location near the University of Western Australia.

“My business partners are younger,” the 40-year-old Mr Maher said.

“They were into social media marketing.

“That has really helped.”

Mr Maher said there were several factors behind the success of Varsity, which had thrived since the group took over the ailing Broadway Tavern and set it on a new path, adopting a US-themed menu dominated by burgers and a name taken from a T-shirt worn by a patron to the previous outlet.

At a time when many hospitality venues are hurting, Varsity has won a dedicated following with prices set for more economical times in keeping with its location.

In fact, the team has decided to replicate the model near another educational institution, having just acquired the Waterford Tavern near Curtin University. They are planning to create their third Varsity operation – there is also a burger outlet in Northbridge – along the same lines as their Nedlands bar, albeit with a slightly more southern US feel.

Mr Maher has hospitality running through his veins. His father, Bob Maher, was one of Perth’s major entertainment kingpins, and the family has owned or had an interest in establishments including Gobbles, Pinocchio’s, Beethoven’s, The Old Melbourne, Fitzgerald’s, The Racket Club, F Scott’s, The Hip-E Club, Black Betty’s, The Aberdeen Hotel, Eurobar and Paddy McGuires.

Against that background, stepping out into the suburbs might seem something different – firstly to near-city Nedlands and now to the far more suburban Karawara.

Mr Maher said the Waterford Tavern purchase was both opportunistic and strategic.

He said there were good opportunities around as the industry adjusted to the downturn and some operators decided to exit. It made sense to capitalise on the Varsity model’s recent success, he said.

However, growth around Bentley where there is considerable development expected – both on campus at Curtin and in adjacent precincts – also provided a longer-term benefit.

“We are particularly excited about the development proposed around Curtin over the next few years; we can’t see our market shrinking,” Mr Maher said.

Varsity’s expansion comes at the same time that one of the city’s most prominent hospitality firms, The Publican Group, prepares to relaunch one of its six Perth venues.

The group has closed the doors at Nedlands watering hole The Byrneleigh, which it attempted to sell in 2014.

A spokesperson for The Publican Group said a new concept was being planned for the Hampden Road pub, which will be subject to a comprehensive renovation.