Chris Girvan-Brown may not be unusual in that he is passionate about his business, but he is one of a more select group who could honestly say their passion is their business. 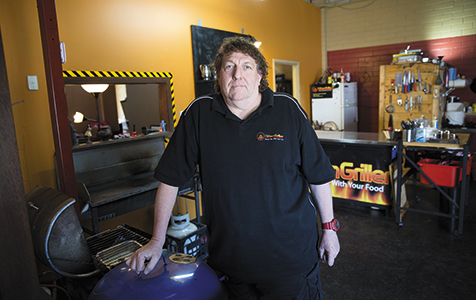 Chris Girvan-Brown may not be unusual in that he is passionate about his business, but he is one of a more select group who could honestly say their passion is their business.

Mr Girvan-Brown has taken his hobby for outdoor cuisine and turned it into a diversified business, albeit employing just himself and his wife on the books plus a few casuals to help out. He sells specialist barbecues, holds cooking classes, road tests new equipment, and has even considered creating his own design.

“They say you shouldn’t turn a hobby into a business … but it was an opportunity that I couldn’t say no to,” Mr Girvan-Brown told Business News.

The Urban Griller cooking school attracts both public and corporate team-building classes, with up to eight classes a month at the Bibra Lake headquarters.

Mr Girvan-Brown said corporate classes could hold up to 40 people, and these had been popular with mining companies and banks – for staff and as networking events.

He said there was a niche market of American-style barbecue that has since grown in Australia, although Western Australia was still behind the eastern states in its uptake.

This shows in the demand for specialist products that Urban Griller imports and sells to the Australian public via its website.

“Quite unusually, about 85 per cent of the market is on the other side of the country,” Mr Girvan-Brown said.

He said the lack of specialist barbecues and equipment in Australia led him to start designing his own products, although these were yet to be fully developed.

“We’re still at the very start of the market I think. I don’t think there’s sufficient demand at the moment to talk about production line manufacturing,” Mr Girvan-Brown said.

“It’s still such a niche market that we’ve not done any of that yet.”

Along with the barbecue school and the online store, Mr Girvan-Brown also does product testing and writes user guides for large manufacturers, which means manufacturing his own will stay on the backburner for now.

Despite the growth of the school – Urban Griller moved to its larger location about three months ago – there are no plans to expand the business.

Perth’s newfound appreciation of the American-style of barbecue is evident in new specialist restaurants around the city, Mr Girvan-Brown said, including Old Faithful Bar & BBQ on King Street, which opened in May.

The restaurant specialises in the authentic ‘low and slow’ style of barbecue, a technique Mr Girvan-Brown said was something a lot of people didn’t understand. The desire to teach this was a driving factor in establishing the school, he said.