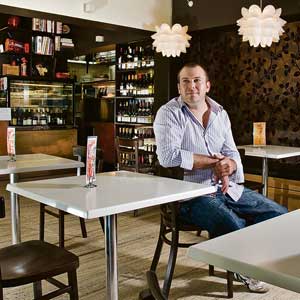 A POPULAR eatery near Kings Park has changed its name, style and direction in the past year, shedding its low-key, lunch bar atmosphere and replacing it with a more modern, upmarket feel.

Located near the bottom of Mount Street around the corner from Jacob's Ladder, Bouchard trades as a café-cum-bistro during the day before moonlighting as a French-themed, a la carte restaurant.

After falling in love with the location, owner Sebastien Bouchard wanted to create something different to the previous tenant which was a popular, albeit simple panini bar and delicatessen catering to Perth's early morning athletes.

"Seven years ago was when I first came to this place, and it's bizarre, I knew I was going to have it one day," Mr Bouchard told Gusto.

"It's such an amazing site, especially in the evening.

"You've got the skyline, the silhouette of the city and the other side of the river which looks absolutely stunning during the evening and no-one ever really capitalised on that before, it was always that little delicatessen."

Mr Bouchard risked $150,000 to change a seemingly winning formula, opting instead for a brand new venture that was relatively untested in WA.

"I just always loved this spot and when I saw it I just thought it had to be a French bistro," he said.

"I'm really into my, not necessarily fine dining, but my contemporary fine foods, but this is a café so I've had to try and amalgamate the two.

"So it's café by day and restaurant by night.

However, changing direction so dramatically meant re-educating customers and staff.

"The greatest challenge was the fact that you have to have your staff and customers shift mindset," Mr Bouchard said.

"We're almost a year old and it has taken us this long to establish ourselves and be understood by our clientele.

"Our clientele know that if they come in for dinner they're not going to sit down, have a coffee and read a newspaper.

"It's full linens, glassware, everything.

"It's central, but it's really hidden away so we have to be on top of our game because if we're not we don't draw the customers in.

"It's a destination location."

Being at the top of his game in the fine-dining arena meant Mr Bouchard had to significantly alter his 12-strong staffing arrangements.

"It was the only way it was going to work because otherwise your café staff are too relaxed and they carry that attitude over and you have people expecting really great table service [at night] and they're not getting it."

Despite turning over a million dollars a year and being constantly busy, not all of the transition has been smooth sailing.

"It was very tough, we had a lot of opposition from a lot of the exercise clientele in the morning," Mr Bouchard said.

"And there was a time when we lost a lot of our lunch clientele because we went from paninis and sandwiches to a la carte.

"It took a good six months to get our lunch trade back."

And he's continuing to build upon his creation with a small bar license in the works.

"I really want to try and have a bar section just inside where only 10-15 people can sit and have a drink," Mr Bouchard said.