A society that openly criticises those who err is likely to be risk-averse, which is a handbrake on decision-making. 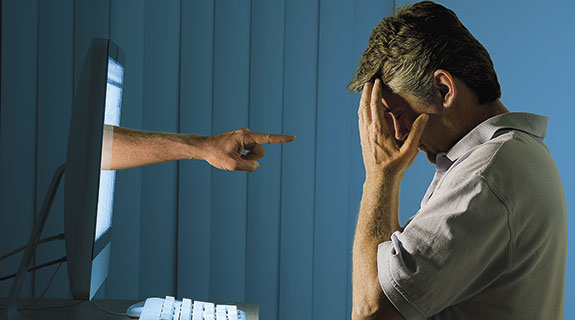 ADVANTAGE: Social media provides a platform for members of the public to openly criticise others. Photo: iStockphoto/mokee81

A society that openly criticises those who err is likely to be risk-averse, which is a handbrake on decision-making.

I saw a girl in a T-shirt recently that read ‘good grammar is sexy’.

It made me think about a typo that went to print in one of my stories, which triggered a brief flurry of irate messages from concerned readers.

Like a lot of reporters I love English and all its idiosyncratic quirks, but I don’t always get it right and admit my knowledge of grammar is a bit thin.

I was educated in the 1970s, a gentler time when grammar was presented as an opt-in arrangement rather than a hard set of rules.

My year two teacher, Miss Morris, taught us to put a comma in a sentence ‘where it felt right’. She was fun.

As it turns out, there’s actually a set of rules for commas and when and why they’re used.

That ‘gentler time’ of my schooling has long gone, replaced by a fast-paced world of mass communication and social media connections.

Twitter is a perfect and interesting example – a place where strangers are totally comfortable sending critical little messages about others’ mistakes.

I’m likewise intrigued by the treatment of big and small blunders in other social media.

The same platforms that are used to construct digital veneers of perfection in the public domain are also harnessed to go after anyone who trips up.

I learned four things in my first few months as a cub reporter – check, check, check and say sorry when you get something wrong.

Sometimes the people you upset become your best contacts. It’s a strange truism that carries a lot of weight in my experience, and was a little gem of advice from my first boss.

No-one expects reporters to say ‘sorry’; it’s disarming, but it’s also the right thing to do.

There are times when, for myriad reasons, reporters get things wrong. That’s why the good ones are vigilant in checking their sources and won’t file a story until they’re sure of its veracity.

I think people have become less tolerant of mistakes during my career timeline, and I think there’s a link between social media and all those carefully curated public images.

A community that won’t stand for mistakes is likely to be risk averse, and that’s bad for decision-making.

It was interesting to hear Slater and Gordon’s chair, John Skippen, explain why the board of the beleaguered listed law firm had rejected managing director Andrew Grech’s resignation.

The business has burned about $1 billion on its UK operation but its board claims this is not the right time for the disruption of a new chief executive.

There are plenty of examples of businesses that have been too slow to act, and too slow to make changes when things weren’t going well.

Businesses get wedded to ideas, just like people do, and it can be hard to change tack. The bigger you are, the tougher it is.

Markets, equities and property all swing too far on the good news because it’s hard to imagine storms beneath the high, blue arc of a summer sky. Remember the China boom? It was going to last forever.

And they also pull back too far when the news is less positive, because when you’re cold and miserable, spring is another country.

What happened to the idea that mistakes are the touchstones of learning?

Most of us remember our worst mistake; it’s seared on the subconscious.

In many ways it’s a shame that failed chief executives rarely get a chance to rebuild their businesses.

Not all of them should, but a lot of knowledge walks out the door when shareholders and the influential institutional investors demand a change of guard.

Most of us don’t make the same mistake twice, and smart leaders seek the counsel of people who don’t necessarily share their view of the world or care to prop up their egos.

It will be interesting to see how long Messrs Grech and Skippen can hold on, and how much they can achieve when parts of the investment community are calling for their heads.

They’re clinging to the wreckage at the moment, and Mr Grech in particular will have to prove he deserves the trust of the board, given he was so instrumental in the UK expansion.

But shareholders can be confident they have a highly motivated leader, desperate to restore his reputation and make good his mistakes.