Unpopularity a fact of life for Abbott

There may be some disquiet about the performance of the government (and Tony Abbott) in the first year in the coalition party room, but the PM isn’t likely to give ground in the leadership stakes. 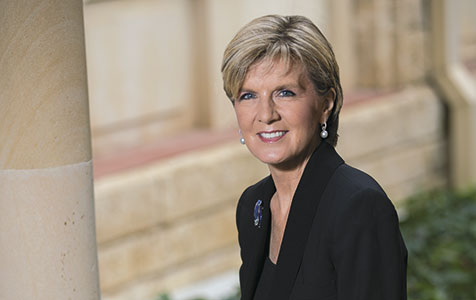 HOLD FIRE: It’s unlikely Julie Bishop would seek to overthrow the prime minister, but she’s emerging as a future leader.

FOR all the historic highs Kevin Rudd achieved in terms of approval ratings as prime minister, it didn’t take long for his Labor colleagues to start sharpening their knives when the polls started heading south.

Now, as the Tony Abbott-led coalition marks its first year in office, many are wondering if the Liberal leader may suffer a similar fate as the man he defeated in 2013.

That figure has lifted to 36 per cent in the latest poll, but that still makes him the second least-popular PM at this stage of a term, which means government backbenchers can be forgiven for beginning to wonder if the man who led them to power should lead them next time.

And if not him, then who should it be?

One name that often comes to the fore is that of deputy leader Julie Bishop. But surely a female deputy couldn't usurp the leader's mantle again.

Let's be frank, no-one at this stage of Kevin Rudd's first term suggested deputy, Julia Gillard, was destined to lead Labor at the 2010 election.

True, some had noted the shambolic Rudd governing-on-the-hop style.

Some even viewed it as an ominous sign in the man who'd so successfully marketed himself throughout 2007 as a youthful version of John Howard.

Mr Rudd, over those months, was bright and breezy Tin Tin.

But no-one foresaw Ms Gillard playing a Brutus role, even though she was already being widely seen as likely to become Australia's first woman PM.

Not even her long-time hard left ideological predispositions were seen as disqualifying her desire to reach the top.

Ms Gillard, forever the leftist, was instead seen as heiress apparent.

No-one envisaged her being called upon to play a dramatic Shakespearean role to reach the top.

She played it cool is much the same way as Mr Abbott's deputy, Julie Bishop, appears today.

All that aside, the possibility of Ms Bishop emerging as contender for the number one Liberal spot also cannot be discounted.

Few could contend she's ever been disloyal to the three leaders she's served, even though she is believed to have let her views be known at change-of-leadership times.

Although far from being spectacularly successful as education, science and training minister (Mr Howard is known to have stepped-in to help out) there were no fatal fumbles.

However, one appeared when Ms Bishop ascended to become Mr Nelson's deputy.

For reasons never explained she used her deputy's prerogative to claim the opposition's treasury post, not that of attorney-general, which would have better suited her since she is legally trained.

However, after a fumble in her treasury duties, Ms Bishop promptly regrouped by resigning, after which she steadily rose as foreign affairs spokesperson and now a globetrotting minister.

The question that obviously remains for sorting out in Liberal MPs' minds is whether she'd have what it takes to lead.

That's certainly not easy to answer because of another fumble, one now long forgotten yet particularly pertinent.

This came about in early 2001, when Ms Bishop had been the member for Curtin for just over three years.

In was in February that year the Richard Court-led Liberals were ousted by Geoff Gallop-led Labor.

Mr Court soon after departed the political stage and his deputy, Colin Barnett, believed he had the leadership in the bag.

But he was unacceptable to many of his state Liberal colleagues.

So a group of them convinced Ms Bishop to stand down as Curtin's MHR in order to contest Mr Court's seat of Nedlands, after which she'd be assured of becoming state Liberal parliamentary leader.

The plan to sideline unpopular Mr Barnett was ready to be enacted, except for one thing.

Several of his mates decided to, as they say, hit the phones and Ms Bishop quickly buckled and withdrew her name from state leadership consideration.

But many who thought they had a Maggie T continued believing her withdrawal was a grave error, since Mr Barnett lost the unlosable 2004 state election thanks largely to the last-minute, poorly presented Kimberley to Perth canal concept.

In terms if the 2016 federal poll, the inevitable question that will be increasingly asked is: How's Tony going to shape up?

The past year certainly hasn't been overly encouraging.

Although there's still time to improve, as 2015 unfolds Liberal hard heads will be asking the hard question about him, just as Labor's hard heads asked it of Mr Rudd in late June 2010.

Given Mr Abbott's dogged character and enthusiasm for a fight, it's reasonable to suspect he'd opt to repeat Mr Howard's 2007 stance of holding on no matter what.