New modelling work at Hot Chili’s Cortadera copper-gold discovery in Chile has the Perth based company convinced that its resource, just in the existing discovery zone, has the potential to grow into a “tier-1” style deposit that is capable of hosting over 5mt’s of contained copper. A recent deviated drill hole unexpectedly delivered 92m @ 0.5% copper and 0.2 g/t gold at end of hole. 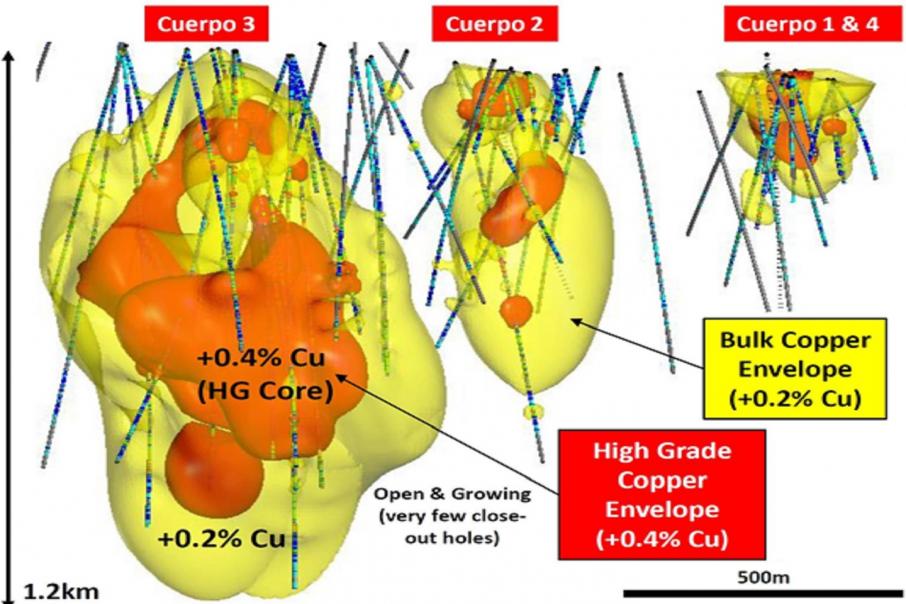 The Perth based ASX-listed company is now convinced that its resource, just in the existing discovery zone at Cortadera, the potential to grow into a “tier-1” style deposit that is capable of hosting over 5mt’s of contained copper.

Hot Chili’s Chilean project is a “porphyry” style of rock that is generally associated with mega tonnes of ore with the copper-gold spread throughout.  This contrasts with a usual “lode” style of mineralisation where most players want to see at least 1.0% plus copper grades.

Given the generally huge nature of porphyry deposits, many are quite economical on sub 1.0% and often sub 0.5% grades.

Any kind of gold credit can also have a material impact on the economics and importantly, Hot Chili’s modelling shows that Cortadera is still open at depth.

Hot Chili also confirmed another strong result from its recent RC drilling program with one intercept of 20m grading 1.0% copper and 0.2g/t gold from 102m.  This hole encountered chalcocite enrichment within the mineralised zone and again it ended in mineralisation.

Cortadera continues to shape up as a globally significant, stand-alone copper-gold project that can leverage off the economics of the company’s nearby Productora deposit.

Productora is located just 14 kilometres from Cortadera and features a JORC resource of 237 million tonnes at 0.48% copper and 0.1 grams per tonne gold.

The company’s 2020 drilling campaign at Cortadera is already underway to test the southern extension of the main porphyry and all of this activity should lead to a maiden resource assessment around mid-year.

The company said its expectation of the potential resource volume has doubled since it acquired the Cortadera discovery back in February 2019 and that it was growing faster than expected.

The maiden resource when it comes out will no doubt be highly anticipated by the market and in particular by Hot Chili followers.