Under the Witch’s spell

The owners of the Witch’s Cauldron have a simple business plan ... make the customers happy. Adam Orlando reports. 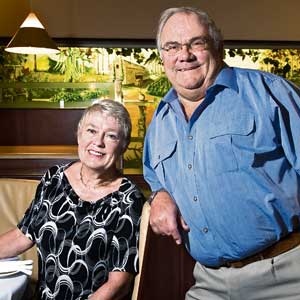 THESE days, Geoff and Tanis Gosling talk about their prized restaurant, the Witch's Cauldron, with a sense of nostalgia.

After all, a great deal has happened in the 40 years since the couple bought the iconic Subiaco restaurant.

"A lot of our customers in the early days used to come from the laundromat that was next door," Mrs Gosling told Gusto.

"People used to do their washing and come in and have a meal.

"One American lady I remember was wondering if she had enough for coffee, so I said 'I'm not going to charge you, come in again some other time and pay for it then'.

"She brought a lot of people and business to this restaurant."

Although times have changed, that wholesome and endearing warmth has remained at the Witch's Cauldron.

It's also one reason manager Bill Trudgian and chef Tony Humphreys have stayed at the business for more than 30 years, along with a number of other long-serving employees.

The Goslings bought the dining landmark in December 1970, a time when Sir John Gorton was prime minister and the Beatles officially split.

It was a big risk, as Subiaco 40 years ago was awash with boarding houses and Rokeby Road was an old-style streetscape, lined with nothing more than a few butcher's shops and some fruit and vegetable stalls.

"In those days, there used to be lots of boarding houses around here," Mr Gosling says.

"But we related to Subiaco, even though then it was still downmarket, we saw the potential with what we saw in Melbourne and Sydney. It had a nice feel and it reminded us of where we came from in Melbourne."

Mr Gosling says while the popular garlic prawns have become a mainstay on the menu since the mid-1970s, the Witch's Cauldron has moved with the times in terms of its business model and adoption of new technologies.

Each process of the restaurant is now tracked through a central database with service times and customer traffic monitored.

Produce, seafood and meat are sourced locally each day with the same suppliers as 30 years ago, with long-term partnerships and employment key operating strategies of the business.

A breakfast menu was introduced three years ago and the restaurant now caters for up to 200 people every Saturday and Sunday morning.

"The restaurant has been evolving all the way through. People often say that it hasn't changed that much, but we know it has; we see the changes and purposely make them subtly and gradually so we don't upset our regulars," Mr Gosling says.

It's those regulars, according to Mr Gosling, who have enabled the Witch's Cauldron to survive the various economic downturns of the past 40 years and continue to grow.

"The customer base, that's the most important thing," he says.

"We're lucky that we've had that customer base which has seen us through recessions.

"In recession times people go back to what they know; they go to eat at places where they know they will get value for money.

"And you will see that time and time again during tough times because they don't want to go to places and spend $100 or $150 and walk away and say, 'well that was a waste of money'.

"They prefer to go back to a place where they've been several times before and feel it was as good as ever."

Mrs Gosling says the business has a simple business plan to ensure customers keep coming back.

"Never take your eye off the ball," she says.

The multi-award winning Witch's Cauldron appears to have kept its eye on the ball, but it was only recently that the Goslings received recognition for a lifetime of achievement in the hospitality sector when they were admitted into the Restaurant and Catering Industry Hall of Fame.