US throws out the welcome mat

WESTERN Australian companies from the design, innovation and culinary industries are making their presence felt at the G'day USA campaign, currently under way in New York, Los Angeles and, for the first time, San Francisco. 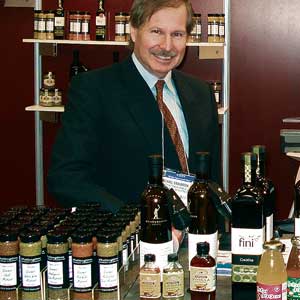 Taste Test: Michael Braybrook expects to leverage some business out of his company\'s participation in G\'day USA.

WESTERN Australian companies from the design, innovation and culinary industries are making their presence felt at the G'day USA campaign, currently under way in New York, Los Angeles and, for the first time, San Francisco.

Now in its sixth year, having started in 2004 as 'G'day LA', the G'day USA program showcases the best of Australia's culture, business and tourism and is the largest annual foreign country promotion to run in the US.

A number of WA businesses from the fashion world will be participating in various fashion events and market days, spruiking their best wares to potential buyers, agents and members of the American media.

Among the WA contingent attending is Ae'lkemi, which displayed its versatile line at the prestigious Los Angeles Fashion Market last week.

The Claremont-based company will be moving onto New York this week for a designer showroom promotional event featuring a select group of Australian designers, who will have the opportunity to showcase their collections to the New York fashion industry over a period of three days.

Speaking to WA Business News from the US, Ae'lkemi owner Alvin Fernandez said he was excited about building on the relationships he created when he attended G'Day USA in 2007.

"When we came to New York in 2007 it was a real eye-opener to see how it all worked in the US," Mr Fernandez said.

"In the space of three days we were able to meet all the major magazines from Vanity Fair to Vogue to Harper's [Bazaar], to all the stylists and all the big department stores like Neiman Marcus and Barney's.

"It was good because a PR firm took us on for six months and helped to educate us in what we need to do in order to build brand awareness in New York, which was very helpful."

Generally, the US responds really well to Australian designers, according to Mr Fernandez.

"I think they appreciate our easy-going business methods and our good attitude," he said.

"But like with anything, you can't expect things to happen overnight. You've got to work hard and keep going and hopefully it will pay off for you."

Also hoping his business's participation in G'day USA will pay off is Michael Braybrook, director of Osborne Park-based Whittington Foods.

It is the first time the WA government has had a stand at the food show.

"We're hopeful of picking up some customers in the US for our locally made mustards - in our range there's about 11 of them," Mr Braybrook said.

"The per-capita consumption of mustard in the US is much larger than Australia.

"About three years ago we shipped a container of our stuff (to the US) and we got fairly good distribution and we are now looking to broaden that distribution into other parts of the US.

"And this show is the biggest gourmet food show in the US, if not the world, so we're cautiously confident we'll be able to leverage a bit of business out of it."

The company's chief executive, Justin Miller is reported to have made quite an impact at the two shootout events in Los Angeles and Silicon Valley, drumming up interest in the earplug and earmuff versions of its product, which allows communication in high-noise environments while retaining hearing protection.