Tyranna Resources’ stream sampling has identified two encouraging cobalt-copper-zinc anomalies at its newly acquired Goodsprings cobalt and base metals project in Nevada. The company will carry out a geophysics program later this month before drilling up to five holes at the Whale trend to confirm the oreshoot, intersect potential mineralisation and drill through the postulated east-west fault. 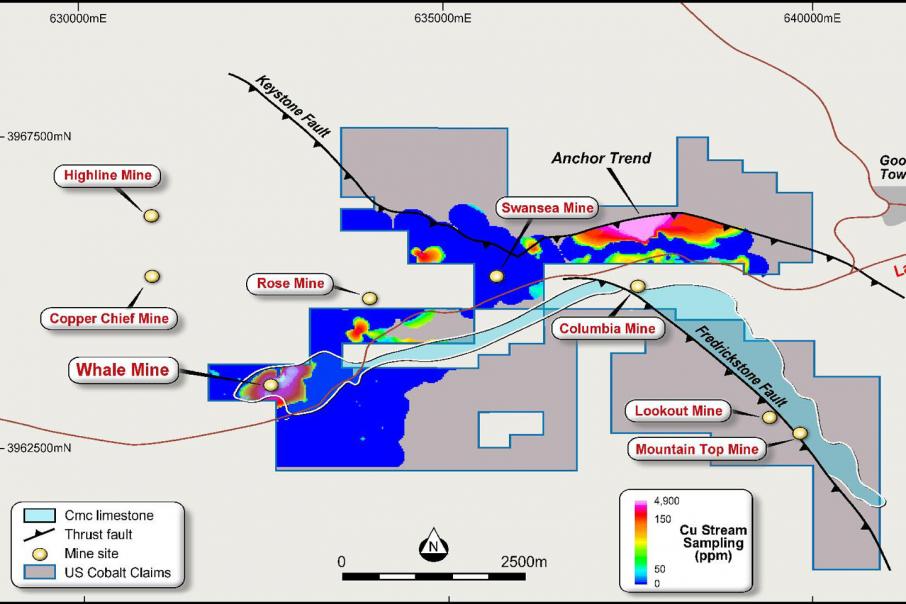 Stream sampling has identified the Whale trend near a previously producing zinc mine and the Anchor Trend, a 2km long copper anomaly extending parallel to the Keystone Fault that will be followed up with a geophysics program later this month.

Tyranna’s geophysics program will map chargeability and resistivity across the survey areas to a depth of between 300 and 400 metres and characterise potential targets for cobalt-copper mineralization.

Once this is complete, the company plans to drill up to five holes at the Whale trend to test the geologist’s structural interpretation.

This drill program will look to confirm the Whale oreshoot and surrounding stratigraphy, intersect the potential mineralisation in the old diggings to the north of the historic mine and drill through the hypothesized east-west fault interpreted by the geologist.

Rock chip samples collected earlier this year returned a range of polymetallic minerals with grades of up to 1% cobalt, 22.5% copper and 30% zinc, hosted in vein, bedded and replacement deposits throughout the project area.

Notably, a grab sample of dump material from the Whale trend returned an eye watering 7.64% cobalt.

Cobalt oxide is found in the wall rock of nearly every copper deposit in the district and about 20 tons of cobalt rich ore that assayed between 6% and 29% cobalt was shipped from four separate copper mines to processing facilities in the region in the early 1920s.