ASX listed Tyranna Resources is acquiring a cobalt and base metals project at the historic Goodsprings mining district near Las Vegas in southern Nevada that contains multiple copper, zinc, lead, gold and cobalt mines. The company plans to apply modern exploration and mining techniques to the project, where mines historically produced about 20 tonnes of ore with reported grades of between 6% and 29% cobalt in the 1920s. 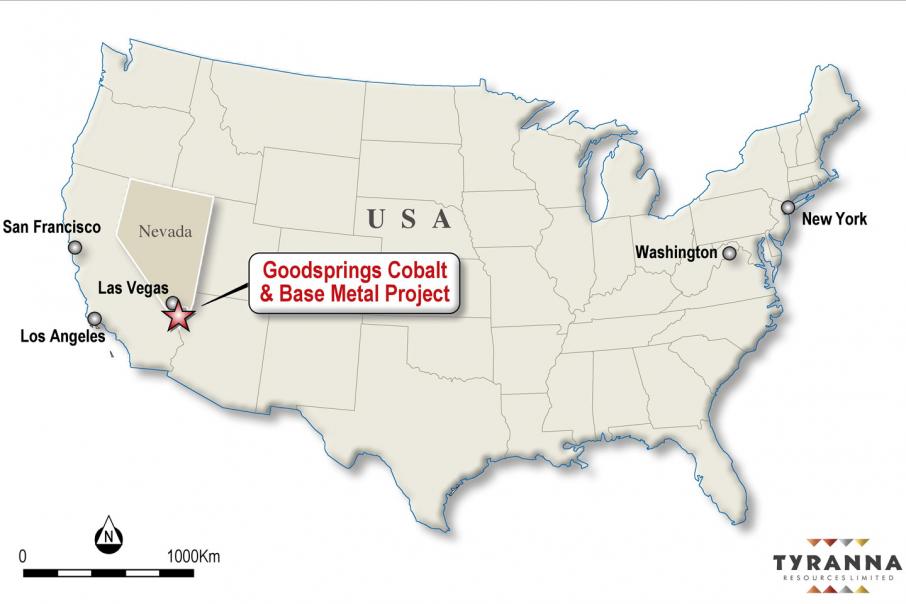 Tyranna Resources is acquiring a cobalt and base metals project at the historic Goodsprings Mining District in Nevada where no modern exploration has been carried out.

The district contains many copper, zinc, lead, gold and cobalt mines with the earliest reported cobalt mining production conducted back in 1856.

Significantly, cobalt oxides are found in the wall rock of nearly every copper deposit in the district.

Rock chip samples collected earlier this year returned a range of polymetallic minerals with grades of up to 1% cobalt, 22.5% copper and 30% zinc, hosted in vein, bedded and replacement deposits throughout the project area.

Initial stream sampling also identified two main cobalt anomalous zones coincident with copper, lead and zinc at the Whale Mine along with copper and lead to the south of the Rose Mine.

Notably, a grab sample of dump material from the Whale Mine returned an eye watering 7.64% cobalt.

Sampling has defined copper, lead and zinc anomalisms over a strike length of 4km at the Whale Mine with the eastern most anomaly remaining open to the northeast.

Soil sampling to the south of the Rose Mine has identified a north trending lead anomaly with partially coincident copper and zinc values.

Tyranna Managing Director Bruno Seneque said: “Historical mining results suggest that this area holds some of the highest grade Cobalt mines that can be found in the district. In the 1920’s the mines in this area produced approximately 20 tonnes of cobalt rich ore from copper mining and historical grades were reported between 6% and 29%.”

“No modern mining techniques have been used here and we are confident that good exploration and mining methods will handsomely reward the company here at Goodsprings.”

Tyranna has executed the agreement to acquire 100% of private company US Cobalt Pty Ltd, which owns the Goodsprings project, through an issue to the vendors of about 141.18m shares at $0.017 each and 30 million options.

The acquisition forms part of Tyranna’s diversification strategy and marks its entry into the high-value battery metals arena. Cobalt prices have risen from USD$23,000 per ton in March 2016 to a high of USD$95,000 per ton on the 21st of March 2018.

Tyranna has commissioned Dr Richard Russell to identify structural controls on the mineralisation and target areas for follow up at Goodsprings.

Further stream sediment sampling is planned to further test the western portion of the project and soil sampling will be completed to follow the eastern most of the multi element anomalous zones to the north.

With a solid slew of high grade rock chips and soils, Tyranna looks to have a solid early stage project in Nevada.