Tyranna Resources has started its resource development infill drilling program at the Jumbuck gold project, located west of BHP’s Olympic Dam mine, in the highly prospective Western Gawler Craton in SA. The project has existing mineral resources of 8.7 million tonnes @ 1.1g/t gold for 319,000 ounces. The program will target the Campfire Bore prospect to upgrade the JORC status of the deposit’s inferred mineral inventory totalling 109,000 ounces. 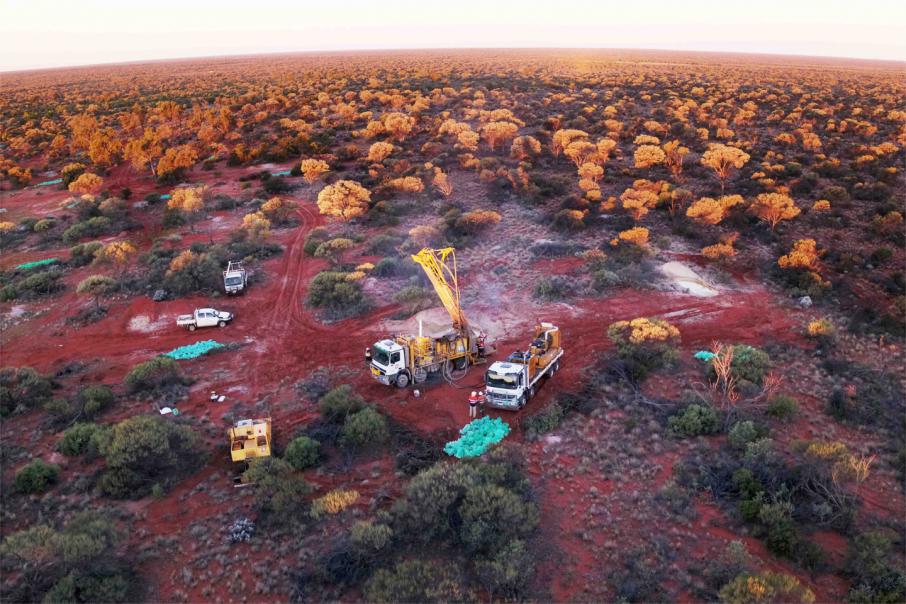 This week the company launched into an infill drilling campaign at its Campfire Bore prospect at Jumbuck aimed partly at upgrading the existing inferred mineral resource to an indicated category.

The Campfire Bore mineralisation is one of several prospects that make up the company’s larger Jumbuck gold project that holds 8.7 million tonnes for 319,000 gold ounces.

The chessboard has changed somewhat for Tyranna in the last month or so, with one of its partners in the Western Gawler Craton JV agreement, WPG Resources calling in the administrators.

WPG has been struggling to keep its Challenger gold operation afloat for some time and the mine is surrounded on all sides by the JV ground, which is managed by Tyranna.

The Challenger gold operation is about 40km south of the Campfire Bore prospect and has reportedly produced over 1 million ounces since commencing in 2002.

Various iterations may play out from here, however Tyranna is strongly focussed on proving up as much gold-bearing dirt in the region as possible as it builds its own critical mass of mineral resources in the broader region.

The company controls nearly 10,000 square kilometres of exploration tenements around the mine, which are a combination of 100%-owned tenure and the joint-ventured ground holdings.

In keeping with the strategy of building up new gold resources in the region, management has delayed its maiden exploratory drilling at the South Hilga prospect, to focus on expanding its gold inventory for existing deposits.

Outside of the Jumbuck project, Tyranna is gearing up for its resource development drill program at the Eureka project north of Kalgoorlie in WA where it hopes to add new ounces outside of an historical open pit resource.

The company also retains just under a 25% holding in the Wilcherry JV project located west of Port Augusta in South Australia.

The majority owner of that project is Alliance Resources and is located west of Port Augusta in SA.

In the US, Tyranna also recently executed an agreement to acquire 100% of a company called US Cobalt and it now controls some very prospective looking ground at the Goodsprings cobalt and base metals project, located 50km southwest of Las Vegas in southern Nevada.

The company also has a stake in ASX listed Kairos Minerals, who is developing promising gold projects in the Pilbara and Goldfields regions of WA.

For now though, shareholders will no doubt be watching with great interest what Tyranna manages to unearth at its drilling programs for the Jumbuck and Eureka gold projects over the next few months.