Tyranna Resources has been steadily increasing its equity in the Western Gawler Craton JV with partner WPG Resources who owns the nearby Challenger gold mine. The parties are now in discussions about toll treating ore from their Jumbuck project at Challenger, creating a possible fast track to production for the junior explorer Tyranna. Drilling will commence at the Campfire Bore prospect soon ahead of a feasibility study. 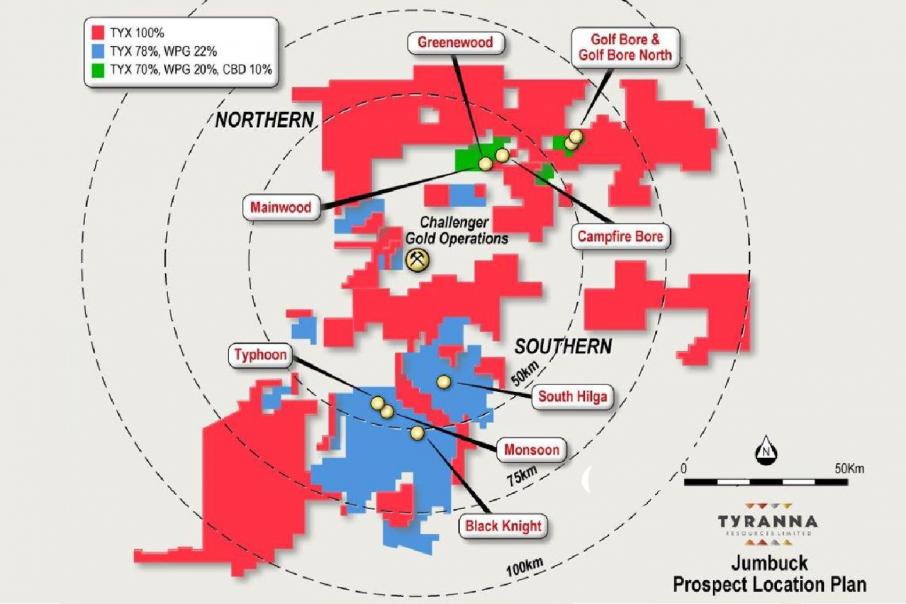 ASX listed Tyranna Resources is now in discussions with JV partner WPG Resources about toll treating its future Jumbuck project ores at WPG’s nearby Challenger gold mine in South Australia, creating a possible fast track to production for Tyranna.

Tyranna has been steadily increasing its stake in the Western Gawler Craton JV by sole funding exploration activities in the first half of this calendar year.

The ASX listed junior explorer is expected to increase its stake even further in the project in the back end of this year, after electing to continue to sole fund it.

The Jumbuck gold project, which is the principal focus of the JV, is located 675km northwest of Adelaide and just 40km north west of WPG’s Challenger gold mine.

Tyranna already holds 100% of the majority of the nearly 9,800 square kilometre land holdings that comprise the Jumbuck gold project and it has now upped its stake in the Northern Jumbuck project to 70.2% and Southern Jumbuck to 78.01%.

The JV partners have also decided that the Campfire Bore prospect is the most economically attractive project to develop, based on optimisation work of the northern projects that included a review of the Mainwood, Greenewood and Golf Bore prospects.

In May, the company announced a significant upgrade to the global mineral resources for the broader Jumbuck gold project totalling 8.7 million tonnes grading 1.1 grams per tonne gold for 319,000 contained ounces.

The Campfire Bore prospect contributed 2.8 million tonnes at 1.2g/t gold for 109,000 ounces to that global resource but is still mostly classified in the inferred category at this stage.

The infill drilling at Campfire Bore will increase confidence in the continuity of the gold mineralisation to an indicated status of classification and effectively prepare the resource for a feasibility study.

If the feasibility study at Campfire Bore is positive, Tyranna will convert the exploration tenement to a mining claim and importantly, it has now agreed with WPG to move forward and establish ore processing terms under the terms of the JV agreement.

The Challenger gold mine is now down hundreds of metres and has not been trouble free. An injection of fresh ore through the Challenger mill at ok grades might be an attractive option for WPG who will also benefit from its partial direct ownership of the Western Gawler Craton JV.

It will certainly provide an inside run for Tyranna into production without the need for a serious capital injection.

In October 2016, the company established an exploration target of 500,000 ounces of gold at Jumbuck and it is well on its to achieving this 2 years later.

Tyranna also announced this week that it will commence a maiden RC drilling program at the South Hilga gold prospect, which is located some 60km south southwest of the Campfire Bore prospect.

The South Hilga prospect was RAB drilled by Dominion Mining in 1995-96, returning some very encouraging shallow exploration results across 500 metres of north-westerly strike.

The South Hilga prospect lies within a much larger area of diffuse geochemistry over 5.8km long by 3km wide also striking north-westerly, where surface calcrete samples have recorded assays up to 0.23g/t gold.

The drilling at South Hilga is in line with company’s strategy to follow up on historical exploration results to help build a critical mass of mineral resources across the Jumbuck gold project.

Tyranna’s tenement holdings completely surround the Challenger gold operations which has produced just over 1.2 million ounces at 6g/t gold since mining commenced in 2002.

The bulk of these tenements lie within an easy 75km trucking radius of the Challenger operation, which means the company potentially has an established conduit for treating its future gold ore streams under its agreed JV arrangement with WPG.

It will be an interesting 6 months for Tyranna as it completes the drill out of the Campfire Bore prospect and commences a maiden program at South Hilga, which appears to have real blue sky exploration upside in gold and maybe even a hint of base metals.