Tyranna clears the decks to focus on Goldfields nickel play

Tyranna Resources has its sights firmly set on a plan to advance its Dragon and Knight nickel projects that lie about 30 to 40 kilometres east of St George Mining’s Mt Alexander nickel project in the Goldfields of WA. The ASX-listed company has put together a grab bag of interesting looking nickel targets and is now planning to embark on a maiden exploration program in the region. 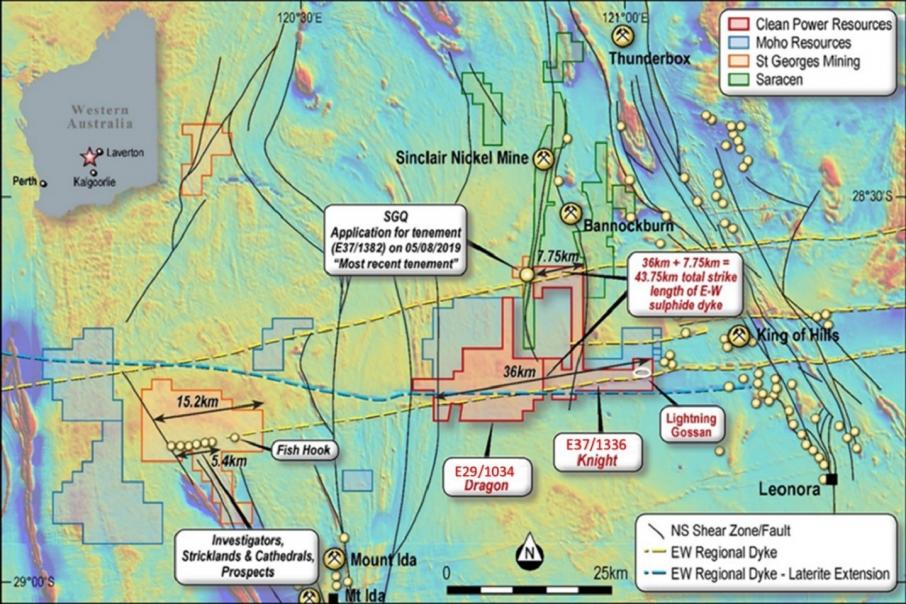 Tyranna Resources has its sights firmly set on a plan to advance its Dragon and Knight nickel projects that lie about 30 to 40 kilometres east of St George Mining’s Mt Alexander nickel project in the Goldfields of WA. The ASX-listed company has put together a grab bag of interesting looking nickel targets and is now planning to embark on a maiden exploration program in the region.

Tyranna is also talking to groups that might be interested in collaborating to mine its 43,100 ounce resource at the Eureka gold project, which lies just 50km north of Kalgoorlie.

It is also expecting a significant balance sheet boost courtesy of Syngas, who has re-confirmed its commitment to buy Tyranna’s interests in the South Australian Jumbuck gold project for $950K, with the funds due sometime during this quarter according to Management.

The Dragon and knight projects are sitting on ground that covers a strike length of some 36km over a prospective geological zone that looks to be along the same trend as St George’s Investigators, Stricklands and Cathedrals prospects at Mt Alexander, where that ASX-listed company continues to turn up some solid nickel numbers.

St George recently appointed Entech to pull together an independent maiden resource for its project whilst it progresses towards a scoping study, all of which bodes well for the prospectivity of the region.

Tyranna’s Geologists have unearthed some historical exploration data from the company’s Lightning Gossan prospect within the Knight project, where surface sampling showed some interesting numbers peaking at around 7,600 parts per million nickel,  5,700ppm copper and 1,140ppm zinc.

Shallow drilling at Lightning Gossan also intersected nickel mineralisation with a four metre zone grading 1,925ppm nickel from just 16m down hole, indicating that there is nickel in the system, the source of which has not yet been found.

Previous explorers have barely scratched the surface around Tyranna’s Dragon and Knight projects where the company has an opportunity to apply modern geophysical techniques in the pursuit of nickel deposits, and the historic data will no doubt act as a guide for targeted exploration going forward.

Meanwhile, Tyranna is exploring its options on plenty of other fronts and is currently in discussions with potential development partners who may be interested in teaming up to mine its Eureka gold project, also in the Goldfields region.

Eureka is host to an existing 762K tonne resource grading 1.8 grams per tonne gold for 43,100 ounces and lies waiting to be either toll mined or sold.

Eureka already sits on a mining lease and is a deposit that looks to have expansion potential with mineralisation open in all directions and in serious need of some drill holes to verify its size.

Tyranna said that 35% of shallow drill holes from its last drilling campaign in February 2019, returned average intercepts of 7m grading more than 2g/t gold at Eureka.

Standout intercepts from the campaign also included 5m grading 25.6g/t from 33m including 1m grading 89.7g/t from 34m and 7m grading 3g/t gold from 39m in another hole.

Subject to statutory approvals, it is not too hard to envisage breaking ground at Eureka, with two previous mining campaigns successfully pulling out over 37,000 ounces at grades between 3.3g/t and 4.5g/t – which is pretty good for a shallow open pit.

Tyranna holds potentially game changing ground in the Mt Alexander region at Dragon and Knight and whilst it is early days yet, there is a lot of enticing geology on this ground and in the broader region that could be said to underpin the company’s decision to sharpen its focus on these two projects.