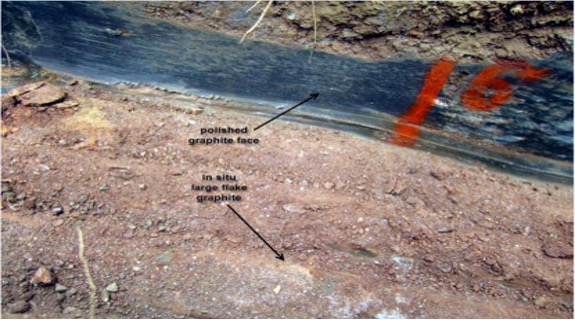 No doubt Management at Triton Minerals weren't too surprised when they recently observed an abundance of visible graphite in the drill core from their maiden drilling program at the company’s Ancuabe project in Mozambique.

Particularly given that they unearthed a reef of high quality graphite jumping out of the ground when bulldozing the drill pad in readiness for the maiden drilling program at Ancuabe.

Initial drilling has confirmed a mineralized area of over half a kilometre within a 2.5km targeted strike length and the company says that multiple mineable zones of large and flake graphite were identified with all assays currently pending.

Based on initial visual inspections of the drill core from the first five diamond drill holes and three RC drill holes from the T12 target at Ancuabe, initial visual estimates indicate the mineralisation zone to be approximately 50m in true thickness down hole.

Triton is rapidly advancing the development of the T12 target area with the aim of defining a JORC compliant resource by the end of 2015, potentially adding to their already world class graphite inventory in Mozambique.

The company’s Nicanda Hill project in Mozambique is already considered to be the largest known graphite deposit in the world and another high grade discovery at Ancuabe would cement Triton Minerals place as the hottest graphite play in the world today.

Triton’s technical director, Alfred Gillman said “Achieving the world’s best flake graphite results from initial metallurgical scouting test work earlier this year was the trigger for committing to the Ancuabe program. The visual observations from our first round of drilling are well beyond even our own expectations and we anticipate further positive outcomes as exploration and project development continues”