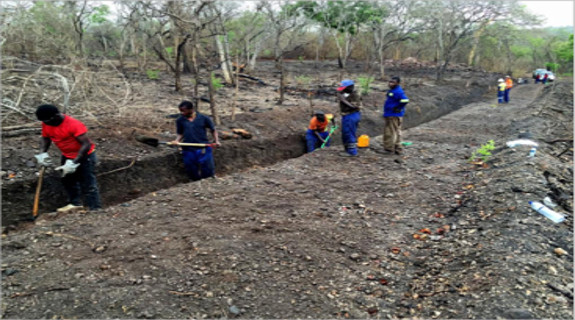 Perth based Triton Minerals have discovered another source of jumbo flake graphite at a new prospect known as “T12” within the Ancuabe graphite project in the east of Mozambique.

The Ancuabe project which is about 100km due east of Triton’s world class Balma North project is notable because of its exceptionally large graphite flake sizes.

The company says that Ancuabe graphite has the best flake size distribution in the world and the largest majority of jumbo and super jumbo graphite flakes.

Whilst most explorers tend to target at least 10 % total graphitic content, Triton Minerals have been targeting just 5% at T12 because of the exceptionally large sized graphite flakes.

The price achieved per tonne of graphite improves dramatically as the size of flake increases due to the increased flexibility of use of large and jumbo flakes.

“The first interim results from Triton’s initial exploration program at the Ancuabe T12 prospect have confirmed that the extensive graphite that is exposed at surface also extends to depth with mineralisation developed over true widths of 100m. Triton is pleased to learn that every hole drilled to date has intersected intervals of very large flake graphite at grades that are as expected for this style of deposit.

To-date only 700m of a possible 4km strike zone has been explored and the company says there is still significant potential upside to be gained from the T12 prospect.