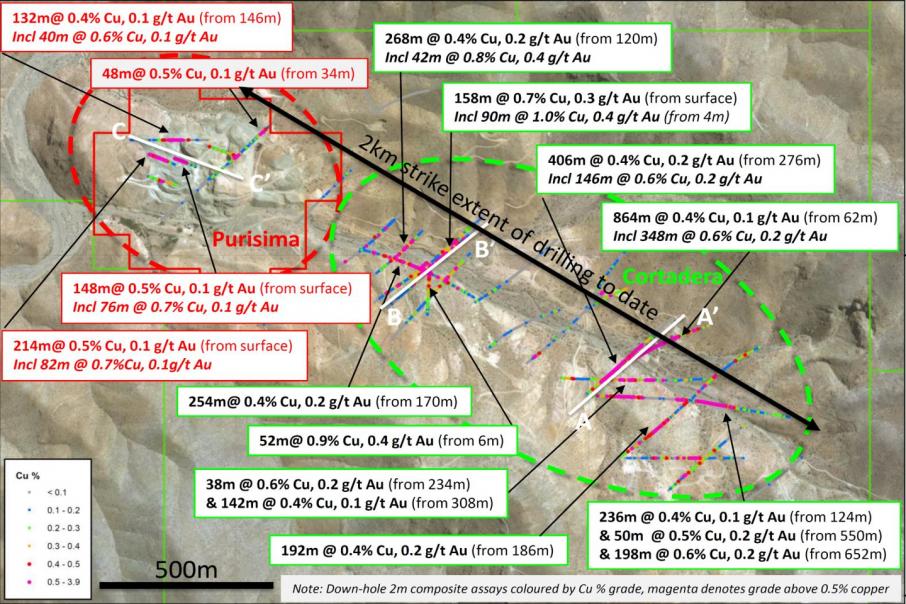 Cortadera is just 14km southeast of Hot Chili’s flagship Productora copper project and the company is banking on it being at least as big as Productora, which could dramatically change the development economics of both projects.

The Cortadera discovery is a well-kept secret that has never previously been publicly released, despite containing extraordinarily wide, high grade intersections of copper/gold mineralisation from over 23,000 metres of diamond drilling completed over a 4 year period up to 2015.

According to the company, this is one of the most significant sets of porphyry copper-gold discovery drilling results since Canadian-listed SolGold’s amazing Cascabel discovery in Ecuador in 2012.

That deposit now holds a global mineral resource of 5.2 million tonnes of copper and 12.3 million ounces of gold.

Productora could then kick in to provide that all important long mine life which can do wonders for the project’s NPV.

Based on this, the company would have the option of locating a proposed processing plant and start-up mining operation and supporting infrastructure at Cortadera rather than Productora, that was originally envisaged.

Given that Cortadera sits between Productora and Hot Chili’s smaller but high grade El Fuego leases, this would seem to make sense if its resource base stacks up.

A successful acquisition of Cortadera by Hot Chili provides the immediate critical mass required to develop a new, large scale, long life copper mining operation in Chile that could transform the company into a serious ASX listed copper miner.

The goal here is quite transparent, with Hot Chili aiming for a long tenancy in Chile, by potentially doubling the mine life of the Productora project to at least 20 years with the addition of Cortadera.

This could be achieved by proving up and incorporating a significant ore reserve from both Cortadera and the smaller, high-grade San Antonio-Valentina deposits from the nearby El Fuego project.

A potential boost in the combined project NPV should assist with the funding of the weighty CAPEX requirement that will be required for constructing and developing the future operation, with Hot Chili’s 20% partner at Productora, the massive CMP, likely to have a big say going forward.

CMP’s parent company CAP, is Chile’s largest steel manufacturer, 20% owned by the Mitsubishi Corporation and has a market capitalisation of about USD$1.6b.

CAP is also a major shareholder in Hot Chili and currently holds a 9% stake in the company.

Hot Chili said it expects to commence drilling to prove up the Cortadera deposit to a JORC-compliant resource status within the coming months, assuming execution of a formal Option Agreement with Carola.

The company will pay SCM Carola USD$30m in three instalments over a 30-month option period to obtain a 100% interest in the Cortadera deposit, contingent on Hot Chili securing project-level funding for the full purchase price.

The proposed funding model being contemplated may include a provision of staged finance by a potential JV partner or partners for the project.

Of note is the fact that Cortadera has already had around USD$15m of drilling ploughed into it by previous owners which should give Hot Chili a head start in the race to wrap a reserve around it.

Diamond drill core has been retained from the three separate porphyry bodies at Cortadera, which should allow the company to quickly and cost-effectively grow its mineral resource and ore reserve inventory in Chile.

The deposit strikes over 2km and has been targeted to vertical depths up to 900m from surface, returning consistent and in places, strong, intersections of copper, gold, molybdenum and silver mineralisation.

The deposit is oxidised to about 70m and contains weathered copper sulphides and carbonates within a horizontal, supergene-enriched oxide zone, where the copper grades are closer to 1%.

This zone represents an enticing low strip ratio, high-grade ore stream straight from surface at any start-up open pit mining operation that might be considered for Cortadera.

Hot Chili’s Managing Director and deal maker, Christian Easterday, said the proposed transaction was pivotal for the company, and follows a similar move by neighbours Teck and Barrick at their Nueva Unión copper project in Chile.

Those companies combined their Relincho and El Morro deposits to form a much larger, robust consolidated copper development.

“The new consolidated development has the potential to place within the production scale range of the top 30 largest operating copper mines globally.”

“… combining Cortadera and Productora makes a lot of sense … (and) … Hot Chili has (now) entered into project-level, strategic funding discussions with key stakeholders in relation to the proposed Carola transaction.”

CAP Director and Board representative to Hot Chili - Roberto de Andraca Adriasola commented “We view this latest development as a very positive addition to the project.”

Hot Chili also announced this week that it has executed a formal Option Agreement to acquire 100% of a mining right, which contains a portion of the same Cortadera porphyry copper-gold discovery.

The Option Agreement with a private Chilean group will allow the company to acquire the Purisima Mining Right or “Purisima”, which covers about 500m of the strike extent of the Cortadera discovery zone.

Significant drilling intersections, similar to those across Cortadera, show wide zones of copper and gold mineralisation from surface, which are open at depth along strike.

About 4,000 metres of diamond drilling has already been completed at Purisima and again, is expected to be rapidly turned into a JORC-compliant resources and reserve estimate by Hot Chili once the deal is done.

The purchase price to acquire Purisima is USD$1.5m over a 3 year period commencing on the date of the first payment, which is expected in the middle of February.

The current private owners will retain a 1.5% net smelter royalty on any production from Purisima.

In stitching together the entire footprint of the Cortadera discovery zone, Hot Chili has ensured that the growth potential has been maximised at this intriguing and potentially highly lucrative project.

In the next few months, the company plans to commence systematic exploration and resource development drilling across the entirety of the Cortadera deposit.

Just how this plays out from here is anybody’s guess, but the new acquisitions have the potential to completely reshape the landscape for Hot Chili in South America as it dreams of becoming the next significant global copper producer.