Brett Carboni has acted to shore up the Mosman Park restaurant’s future. 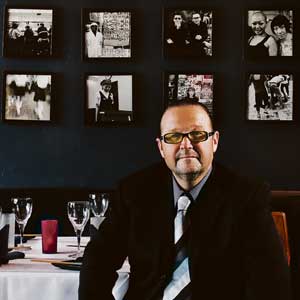 DRINK SAFE: Brett Carboni says Tsunami only made a profit after it scrapped its BYO policy. Photo: Grant Currall

FROM the inner city to the far-flung suburban haunts north and south of the river, if you've a hankering for Japanese food you'll probably find something to satisfy. Getting a table at one of the better establishments might prove more difficult, however.

One of the originals is Mosman Park-based Tsunami, from where Brett Carboni has seen many Japanese restaurants come and go.

"It's a very interesting situation. Normally in the boom a lot of restaurants would have opened, but a shortage of good affordable real estate, along with chefs and front staff, prevented this," Mr Carboni told Gusto.

"Consequently we aren't seeing the enormous casualties [closures] in restaurants that I've seen before. So it's still a bit hard to get a seat on Saturday night."

It seems our appetite for sushi has not diminished, although those more familiar with Japanese cuisine well know, there's more to Japanese than sushi.

Sushi, the combination of raw fish and seasoned rice that seems exotic to the foreign palate, is a supremely logical food in Japan.

The Japanese have turned sushi into a multi-billion-dollar international business and the delicacy often defines the restaurant at which you are eating.

But Mr Carboni believes those Japanese restaurants that have evolved their menus to more modern-inspired Japanese cuisine are most likely to succeed.

Mr Carboni says he soon discovered at Tsunami that sushi isn't everybody's cup of tea, and that catering for Western appetites while retaining Japanese tradition can be costly.

"We used to get great Kurobuta pork, the Wagyu of pork, from Byron Bay, but transport costs made it uneconomical," Mr Carboni says.

"You have to be a detective in this game when it comes to sourcing produce economically, especially tuna. Of course you can pay through the nose for it but you have to mark it up accordingly and you price yourself out of the market.

Battling fluctuations in prices for premium seafood and the changing value of the Australian dollar, Mr Carboni says Tsunami faces challenges unfamiliar to many other WA restaurants.

"Soft shell crab has skyrocketed," he said of the rising costs of seafood.

"Fortunately a lot of our products are local; tuna from Fremantle and salmon from Tasmania, so the price rises weren't too much.

"But a local fish and chip shop wouldn't have room to move. Ouch."

Mr Carboni says sushi wouldn't be sushi without tuna, particularly bluefin tuna, costing anywhere between $2,000 and $20,000 depending on the size, the season and their fat content (fattier is better), so Tsunami's choice to offer bluefin tuna was a costly one.

"The other Japanese places, let's use tuna for example ... the other places will use yellowfin or they will use the frozen pre-packed tuna," he says.

"We'll go and get bluefin, and that's a lot more expensive."

To remain profitable, Tsunami changed its business structure with a focus on corporate functions, while retaining its exclusivity and only opening during the evenings.

He said scrapping the restaurant's 'bring your own' policy and securing the land at Mosman Park cemented Tsunami as a stayer in Perth.

"We never made a profit until we stopped it," Mr Carboni says of eliminating the BYO policy. "Also securing our land ... we couldn't do what we wanted to because of the landlord but that's fixed now as we bought the property.

"We couldn't do much because of the lease situation, but now I'll either sell it or open it up to worker participation and ownership.

"This will happen sooner rather than later ... it's inevitable. I see good restaurants should be like law firms in this regard.

"But restaurants are more capital intensive and the staff don't have access to funds.

"Also, the reasons people own them are a lot freakier - you'd be surprised."

Born in Perth, Mr Carboni spent some of his early childhood living in Yokohama with his mother, learning to speak Japanese fluently, and has spent most of his adult life around Japanese people and their culture.

Through his experiences in Yokohama and passion for wine, Mr Carboni has stamped his name on the menu and offerings at Tsunami, assisted by an elite team that provides a level of sophistication and service.

In 2001 and 2002, Tsunami won the Tucker Seabrook Wine List Award for its exclusive and eclectic selection of wines.

"The secret is we still keep our reasonably priced main menu because that's where the turnover is," Mr Carboni says.