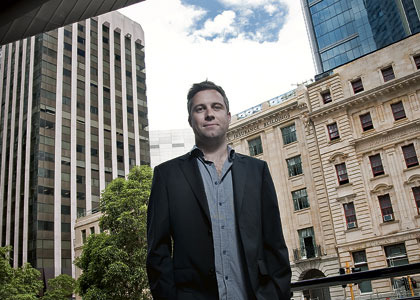 HIGH PROFILE: The Beaufort Street Merchant’s Scott Taylor believes the Trustee Bar and Bistro will be one of the top food and wine venues in Australia. Photo: Grant Currall

THE heritage buildings at the base of Brookfield Multiplex’s imposing City Square office development are set to bustle with new life as work begins on transforming the long-neglected properties into a high-profile food and beverage precinct.

Colonial Leisure Group, the team behind the Beaufort Street Merchant and Halo restaurant’s Wolkowinski family, will collectively invest close to $20 million to transform these grand, turn-of the century properties into three distinct food and wine ventures.

The heritage buildings sit in front of the $500 million City Square office tower, which will provide a new Perth headquarters for BHP Billiton when it is completed next year.

In addition to the main tower, approvals have already been secured for a second 17-storey office development on the site.

All three hospitality operators are banking on Perth’s resources and energy boom as well as the renaissance of the CBD to deliver a steady flow of patrons through their doors.

It’s no small gamble for the Beaufort Street Merchant’s Scott Taylor, who plans to launch the Trustee Bar and Bistro in April along with a fast-paced coffee operation at the base of the main tower called Obsesso.

The Trustee will trade over two floors of the WA Trustees building, with the top floor or St Georges Terrace level operating as a bar with capacity for 120 seats and a 140-seat bistro downstairs. It’s a far bigger venture than the 95-seat Beaufort Street Merchant in Mt Lawley, but Mr Taylor is confident he has the skills, experience and the right team to make the Trustee one of Australia’s top food and wine establishments.

Mr Taylor has set the bar high with the Trustee, acknowledging the only way it can work is if it delivers a world-class product.

And it will face some stiff competition from its neighbours but Mr Taylor already knows the spin-off benefits from being located in close proximity to other quality food and wine venues from his experience on Beaufort Street.

The biggest operation in the precinct, Print Hall will host up to 1000 patrons across four levels, including a roof-top terrace.

Colonial Leisure, which operates the Raffles Hotel and the Royal in East Perth, was drawn to the City Square project for its focus on setting a new benchmark for food and wine in the city.

Colonials’ Lyndon Waples described City Square as a “city within a city” with a hub of leading food and wine businesses.

The family behind Halo on the Barrack Street Jetty have signed up for the 600sqm Royal Insurance Building, which they plan to transform into the Heritage Brasserie, Bar and Boardroom.

Edward Wolkowinski revealed the top level of the property would house the 90-seat brasserie in the style of the grand cafes of Europe as well as a bar overlooking the terrace and private dining room.

Downstairs will trade as Bobeche, a night-time venue serving light food and beverages.

Mr Wolkowinksi would not discuss how much they were investing in the fit out of the property but his mother, Lynn Wolkowinski, travelled to Paris and the US to source custom-made pewter bar tops and vintage sinks.

It’s a serious investment for the family, which plans to continue running Halo but Mr Wolkowinski said the three operations,  along with the businesses that will take up space in the neighbouring Technical College building, would underpin the success of the entire precinct.

“What the guys with Print Hall are doing and with the Beaufort Street Merchant guys going into Trustees next to us, it’s very exciting having that whole area opening up and … keeping people in the city,” Mr Wolkowinski said.