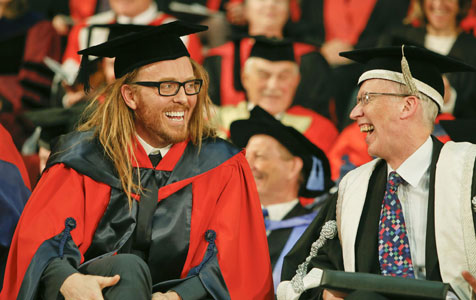 Former Perth arts student Tim Minchin's achievements on the stage have been recognised by the University of Western Australia, which awarded him an honorary doctorate last night.

Mr Minchin, the son of a Perth doctor, last night joined 225 graduates receiving their degrees in historic Winthrop Hall, marking one of the highlights of the university's 2013 Centenary Year celebrations. He delivered an address to graduands and was awarded the Honorary Degree of Doctor of Letters for his contribution to the arts.

He is currently composing and writing a new stage musical to return to WA before starting work on a musical feature film for DreamWorks Animation.

London-based Mr Minchin was raised in Perth and educated at Christ Church Grammar School before attending UWA, where he graduated in 1996 with a Bachelor of Arts in English and Theatre. In 1997 he was accepted into the Western Australian Academy of Performing Arts at Edith Cowan University, graduating in 1998 with an Advanced Diploma of Contemporary Music.

He teamed with fellow UWA alumnus, author, artist and film-maker Shaun Tan to narrate The Lost Thing, which won the 2011 Oscar for best animated short film, and wrote the animated beat poem Storm, which premiered in London in 2010 and recorded more than 2 million hits on YouTube the following year.

Despite the demands of international stardom, Mr Minchin remains a patron of the WA Youth Theatre Company, as well as The Prince's Foundation for Children and the Arts in the UK, and Roald Dahl's Marvellous Children's Charity.