It’s not a new idea, but Perth restaurateurs are embracing the progressive dinner trend. 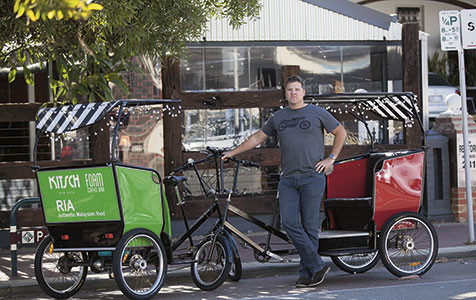 DRIVING DINNER: Nick Bond’s idea to use rickshaws for advertising has morphed into a progressive dinner plan. Photo: Attila Csaszar

Gliding slowly along Leederville’s Oxford Street in a rickshaw evokes fleeting memories of an Asian holiday, with the setting sun bathing the scene in soft light as the Saturday night vibe starts to stir.

And with a Malaysian entrée just consumed at Ria Restaurant and an Asian main waiting at Kitsch bar, the rickshaw is a more than appropriate vehicle for the short journey between the two hotspots on the Leederville ‘Food Safari’.

However transport wasn’t the original plan the owner of the two establishments, Nick Bond, had for the rickshaws.

“I just wanted to do some advertising with them. I thought that they would look quite good on Oxford Street and I could just do some signage on them,” Mr Bond told Gusto.

But the idea morphed into a progressive dinner concept, where customers book for the evening and enjoy a three-course dinner across Mr Bond’s three Leederville venues (the last being Foam Coffee Bar) with a friendly rickshaw driver providing the mode of transport in between.

“It’s really a VIP service – that’s really how we’re pitching it; the customers become a priority for us at the restaurant because it’s something a bit different,” Mr Bond says.

After only a few weeks Mr Bond already has bookings up until Valentine’s Day next year; but at $60 a head it’s not a moneymaking venture.

“We’re not making money out of it, it just gives the brands really good profile,” he says.

Mr Bond says running the safari has been a bit of trial and error, and expects modifications to be made.

“We’re just seeing how it goes. We know it’s not perfect and there are a few other things that we’re looking at including.”

In the CBD, Brookfield Place is also offering running progressive dinners (minus the transportation) during the summer months, but its motivation is to help people explore the increasing number of venues in the precinct.

“These events provide the perfect opportunity for customers to trial a number of venues at one time,” Brookfield Place Perth general manager Alison Robertson says.

There are more than 10 venues offering dinner in Brookfield Place, and customers can experience four in one evening by joining a progressive dinner.

Under Brookfield’s $150 per head concept, the night begins with a cocktail and entrée at Bar Lafayette followed by the main course at The Trustee.

The Print Hall serves up desert and the night ends with teapot cocktails at Bobeche.

Ms Robertson says the concept enables venues to get larger groups through at times that aren’t busy.

And by working from a set menu, the pressure on chefs is reduced – even if a large group is booked.

With tickets for that event costing $160 it’s not the cheapest on offer, but the difference is it’s a fundraising venture, with all proceeds going towards the Beaufort Street Festival.