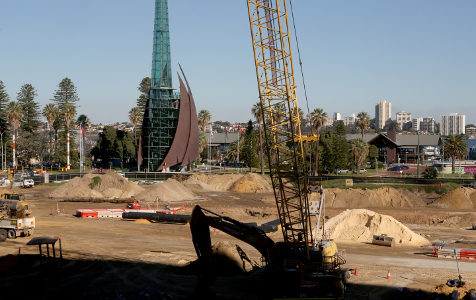 The race to build a hotel and apartment tower in the state government’s blue riband Elizabeth Quay precinct has turned into a tug-of-war between three consortia.

It’s understood the Metropolitan Redevelopment Authority has reduced 14 submissions to a shortlist of just three: a consortia of Brookfield Multiplex, Frasers Property and Woods Bagot; Hassell in partnership with Sheraton and Australian Treasury Management; and the Spencer Green Group.

Leighton Properties was thought to be interested in the sale of these first two sites at Elizabeth Quay, as was Pindan’s property development and investment operation, Otan Property Funds Management

Otan joined forces with luxury hotel operator Ritz-Carlton for its bid, and while sources close to the sale campaign suggest it did not make the cut, Otan plans to bid on any further lot sales on the site.

Otan managing director Mark Butler said the Elizabeth Quay precinct was an exciting development for Perth and Otan had the financial firepower to bid for any further land sales on the riverside site.

“I think it’s a spectacular location and people will look back and ask why we didn’t do this years ago,” Mr Butler said.

Despite failing to make the shortlist in partnership with Otan, it’s thought the Ritz-Carlton is still in the running for lots nine and 10, potentially as part of the Spencer Green Group consortium.

Leighton Properties was in the headlines earlier this month after negotiating a $435 million deal to sell the first three towers proposed for the Kings Square precinct within the state government’s City Link project to national property investment group Dexus.

Leighton pulled off a significant leasing coup after signing-up oil and gas giant Royal Dutch Shell for the development and it is also in negotiations to sell a separate Kings Square property of 13,000 square metres to WA Health Insurer HBF.

Leighton is also the preferred proponent, in a joint venture with Mirvac, to develop the broader City Link land holding.

The City Link land will eventually reconnect the commercial heart of the city with Northbridge and fundamentally shift the axis of the city.

The MRA would not discuss the details of its Elizabeth Quay shortlist but it did reveal a decision could be made as early as July.

Each consortium has had to produce detailed submissions covering financing, design and delivery of their proposals for the waterfront hotel and apartment sites.

An announcement regarding the successful sale of these two sites will provide an important boost for Elizabeth Quay and the state government as it struggles to balance revenue shortfalls with its vision for the city.

The state government courted hotel operators out of Singapore and Hong Kong late last year in a bid to attract a world-class brand to the unique precinct.

If the Brookfield Multiplex consortium is successful, the Elizabeth Quay project will give Singapore-headquartered Frasers Property its second high-profile hotel in Perth. It cut the ribbon on its 20-storey Fraser Suites Perth in the Queens Riverside precinct late last year.

The hotel was the first part of an ambitious plan for the former Metrobus Depot in East Perth and construction has already started on the first of three apartment towers slated for the property.

Frasers is clearly keen to expand its investment in Perth after missing out on a competitive bid for the Waterbank precinct at the east end of the city to Lend Lease.

A successful bid at Elizabeth Quay would give it a showpiece in the city and considerably bolster its brand in the state.

A win for the Sheraton-Hassell consortium would give the international hotel group a five-star presence in Perth’s underserviced accommodation sector.

Sheraton parent company Starwood Hotels exited the Perth market in 2010 after Pan Pacific took over the management contract for its Adelaide Terrace hotel.

It has since bought back into Perth through the management of the Citigate Perth Hotel, which was bought by GIC Real Estate and Host Hotels and Resorts in May last year.

Starwood took over the management of the hotel and it was rebadged with its mid-market Four Points brand.