The lack of a political plan to confront emerging terrorist threats is a grave concern for Australia. 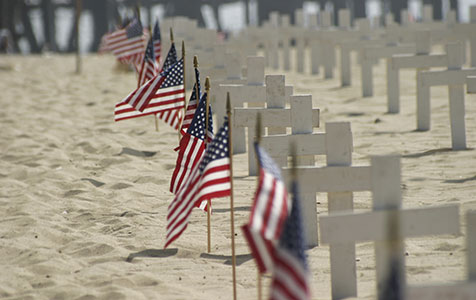 COSTLY: The US has paid a heavy price for its involvement in Iraq. Photo: iStockphoto

With Australian defence personnel back in action in the Middle East a third time in 25 years, it’s worth re-assessing this complex situation.

So I firstly checked polling data to see how fellow Australians viewed the involvement of a 600-strong Australian expeditionary force.

A poll in The Sydney Morning Herald asked the following question: ‘Do you support the Australian government’s decision to engage the RAAF in air strikes against Islamic State in Iraq?”, to which 49 per cent of respondents replied ‘yes’, 42 per cent ‘no’, and 9 per cent ‘uncertain’.

Australia’s two previous involvements were the First Gulf War (1990-91) and Second Gulf War (March-May 2003), after which we policed a corner of southern Iraq for several years.

Troops under the leadership of US general Norman Schwarzkopf then ignominiously trounced the Iraqi forces.

But Hussein was only defeated, not conquered, since President Bush ordered a halt to a clearly unstoppable allied advance on Baghdad.

That resulted in a 12-year no-fly zone over Iraq, scandalous evasion of UN trade embargoes, Hussein’s threats to exterminate the so-called Shi’ite ‘Swamp Arabs’ and Kurds, and finally Western intelligence agencies’ miscalculation of his alleged weapons of mass destruction stockpiles.

Foolishly, Washington highlighted these as the casus belli for the Second Gulf War (rather than the threatened Shi’ite-Kurd genocides).

Failure to find any WMDs, the enormous financial cost of the war, and mounting American casualties meant the newly elected Barack Obama had the public on side when he started bringing US troops home, largely in line with the US-Iraq Status of Forces Agreement signed by George W Bush in December 2008.

With Iraqi forces now in charge of security in their own country, and Iraqi president Nouri al-Maliki’s government favouring the long-repressed Shi’ite population over the Sunni minority that prospered under Saddam Hussein, things in Iraq went from bad to worse.

This paved the way for the emergence of a Sunni-inspired (Qatar and Saudi Arabia) and financed wing of Al-Qaeda – the Islamic State of Iraq and the Levant (ISIL) – which narrowly missed occupying all Shi’ite-controlled Iraq in June and perhaps pressing on into Shi’ite Iran, and seeks domination of all lands north of the Persian Gulf to Syria-Lebanon against Iran’s wishes.

So, a reluctant President Obama belatedly repeated the Bush approach of corralling a coalition of willing nations.

But unlike its predecessor, the Obama posse includes Muslim plus non-Muslim military units, and Australia’s 600-strong force.

Were we wise to join?

I’m with that 49 per cent if it means rescuing Iraq’s remnant Christian communities, the Kurds, and Yazidis from ISIL-initiated genocide.

Let them fight it out or resolve it, without risking Australian lives.

While ostensibly our allies, Saudi Arabia and Qatar ignited this conflict by having bankrolled, for years, the global spread of radical Islam.

Both have outlaid billions of dollars promoting a virulent proselytising variant of Islam formulated by Abdul Wahhab (1703-92).

“This is a time bomb that, under the guise of education, Wahhabi Salafism is igniting under the world … really,” Shaw wrote.

“And the question then is ‘does bombing people over there really tackle that?’

“I’d far rather see a much stronger handle on the ideological battle rather than the physical battle.

“The root problem is that those two countries are the only two in the world where Wahhabi Salafism is the state religion – and ISIL is a violent expression of Wahhabist Salafism.

“The primary threat of ISIL isn’t to us in the West: it’s to Saudi Arabia and also to other Gulf states.

“I’m against the principle of us attacking without a clear political plan.”

“The estimated $120 million spent by Saudi Arabia since the 1970s has funded mosques, schools, paid imams, sponsored Australian teachers and clerics to train in Saudi Arabia; financed youth groups and camps; and provided literature, overseas speakers, videos and other propaganda.”

It’s something our politicians must confront.