Hot Chili has outlined thick zones of porphyry-related copper and gold mineralisation during its maiden RC drilling campaign at the large Cortadera deposit located in central Chile. Results included 122m @ 0.6% copper and 0.3g/t gold directly from the surface, including a high-grade intercept of 20m @ 1.2% copper and 0.5g/t gold from 40m down-hole, related to a wide supergene enriched zone of copper. 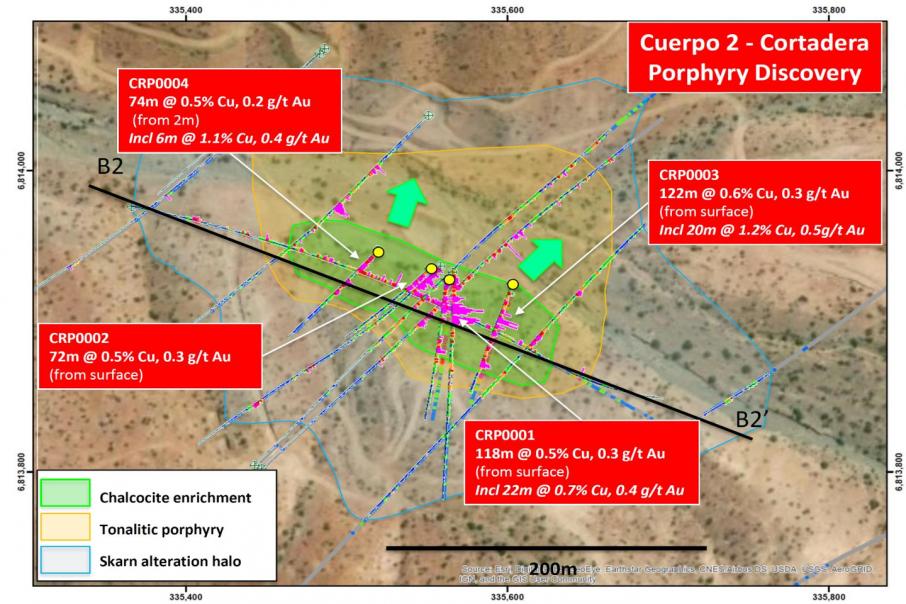 The exciting results confirm the presence of large volumes of porphyry-related copper-gold mineralisation at the newly acquired deposit and validate historical diamond drilling intercepts outlined from the property.

According to management, the shallow drilling component of the program is now completed across the two main porphyry centres – named Cuerpo 1 and 2 - with deeper RC drilling at Cuerpo 3 to the southeast, also well advanced and expected to finish soon.

At Cuerpo 2, the company confirmed that higher-grade copper-gold intercepts were related to supergene chalcocite enrichment – a high-value copper mineral, opening up the potential for significant tonnages of elevated copper grades, with substantial gold credits, near to the surface at Cortadera.

Several deep RC holes have also ended in mineralisation and will now be extended by diamond drilling to confirm the full depth of the ore system currently being targeted at Cortadera.

Hot Chili Chairman Murray Black said: “Results announced today are the first step in Hot Chili’s validation of Cortadera as a major copper-gold discovery, that has the potential to be transformative for the company.”

Mr Black also said that Cortadera and Productora could underpin a globally significant new copper development on the coastal range of Chile, which offers size, location and infrastructure advantages over its peer group in the country.

The company’s drilling program is targeting three separate porphyry bodies identified at Cortadera to confirm and extend areas of known surface enrichment and to test thick, higher-grade, copper-gold mineralisation not closed off in the past.

Cortadera is a real hidden gem, with extraordinary widths of deep-seated copper-gold porphyry mineralisation only released publicly for the first time in the last few months.

In February, Hot Chili revealed that it had executed a formal option agreement with the private owners of the project, to acquire a 100% interest in the potentially, game-changing venture.

The Cortadera ore system remains open in all directions and demonstrates the latent potential to host a much larger global resource base than the company’s existing Productora deposit, that already holds 1.5 million tonnes of copper and about 1 million ounces of gold.

Hot Chili has also secured the option to acquire the smaller Purisima mining right that is along strike from Cortadera and also contains wide, consistent intersections of copper-gold mineralisation from diamond drilling.

The acquisitions generate an opportunity for Hot Chili to develop the Productora, Cortadera and nearby high-grade satellite El Fuego deposits concurrently, utilising a central processing facility and hence potentially creating a substantial integrated copper mining hub in this region of Chile.

The company’s strategy is crystal clear, with Hot Chili aiming for a long tenancy in Chile, potentially doubling the mine life of the Productora project to at least 20 years, with the addition of Cortadera and the previously drilled El Fuego satellite deposits.

The outstanding results from the company’s ongoing drilling program at Cortadera and its future funding initiatives to develop a significant integrated copper mining operation in this region of Chile are the key catalysts for Hot Chili’s operational goals in the country.

The acquisition of Cortadera has the potential to completely transform and redefine Hot Chili’s fortunes in South America as it aims to become a significant new global copper producer.