The right climate for business

The team behind The George and The Byrneleigh is about to take flight with a new venture in the CBD. Carolyn Herbert reports. 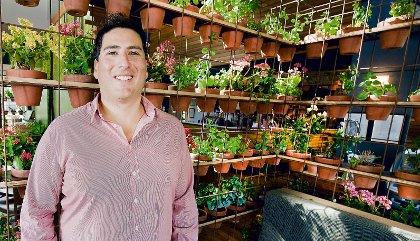 FOOD FOCUS: Steve Garcia says he and business partner John Ahern have always placed a strong emphasis on the restaurant part of each of their business ventures, which include The Byrneleigh in Nedlands. Photo: Madoka Ikegami

MELBOURNE-BASED The Publican Group is quickly establishing itself as an up-and-coming player in Perth’s hospitality market.

The group was formed in 2008 by directors Steve Garcia and John Ahern, who are the driving force behind The George and The Byrneleigh, and will soon open their new roof-top bar, The Aviary, in Perth’s CBD.

Along with their three Perth venues, the pair owns and operates 10 venues in Melbourne.

While in Perth working on preparations for The Aviary, Mr Garcia took the opportunity to talk to Gusto about his current favourite venue, The Byrneleigh.

Opening to the public almost a year ago, The Byrneleigh is situated on the tree-lined Hampton Road in Nedlands.

Previously a cafe with a tavern licence, Mr Garcia told Gusto he saw great potential in the site.

“The strip there in Nedlands is such a developing little area and there are a lot of people coming through, particularly with the university and hospital nearby,” he says.

“We wanted to bring a little bit of Melbourne in suburbia and hopefully in time it could develop into the next Mount Lawley.”

Described as a ‘gastro-pub’ offering modern Australian fare, Mr Garcia says there has always been a strong emphasis on the restaurant component at each of their venues.

“We [John and I] have a strong background in food … food is our backbone and we find that by focusing on the food, it gives our venues longevity,” he says.

To allow its patrons to take advantage of the local climate The Byrneleigh makes valuable use of open spaces, such as its outdoor beer garden area.

Along with the growth opportunities in Perth stemming from the buoyant economy, Mr Garcia says Perth’s weather was a key factor in the pair deciding to expand their business.

“Perth has been the heart beat of Australia’s economy for a long time with the whole mining boom and there was so much growth still to happen and we wanted to be part of it,” he says.

“We enjoy coming here because the weather is awesome, the people are lovely and there is still plenty of opportunity for good business.”

Mr Garcia says he has been surprised how different the Perth market is to that of Melbourne.

“The Perth market is totally different … it’s very different to doing business back over east; I find in Perth people are a lot more sincere and they genuinely want to do business with you,” he says.

The group has invested heavily in the promotion of its venues, with marketing teams located in both Melbourne and Perth.

“One of the biggest things we do that is a little bit different from other groups is we put a strong emphasis on building up a customer database,” Mr Garcia says.

“That way we can target champagne drinkers for a champagne promotion or people who only eat here and send them specific promotions, instead of bombarding everybody with the same type of promotion.”

And while he finds it difficult to measure the success of social media, he says it is a marketing tool that must be utlised.

“With Facebook and Twitter we’ve found that it’s something you have to be part of these days, because people are using so many different mediums to communicate,” Mr Garcia says.

“It is difficult to measure the success of social media, but it certainly does have an impact; we haven’t even opened the Aviary and we already have 1,200 Facebook members.”