The neighbourly thing to do 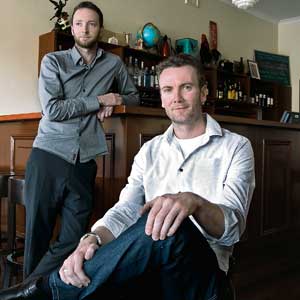 NEW FOCUS: Paul Fowler (right) and Gerry Shields met at the Norfolk in Fremantle, but have now teamed up at The Stanley, on Cambridge Street in Wembley. Photo: Grant Currall

WHEN a lawyer seeks out specialist advice it's often centred on some sort of litigation.

Not so for Paul Fowler, a lawyer with more than a decade of experience in some of the country's top-tier law firms.

Melbourne born and bred and a specialist in the employee relations field for the likes of Freehills and Deacons, Mr Fowler has spent the past two years asking those in the know for advice, guidance and information on setting up a chic neighbourhood bar in Wembley.

And that advice has paid off.

Mr Fowler says it's his neighbour, and long-time friend, who has been his most advantageous resource.

"Hamish Fleming is a good mate of mine from uni days over east," Mr Fowler told Gusto.

"He followed the changes in liquor laws and convinced me there were opportunities here.

"And (practising) law was getting a bit old for me so it was a convenient juncture to come over and pursue a great opportunity."

"We tie in with them, obviously. We don't need to have a commercial kitchen, our patrons are aware they can bring their burgers into the bar, and that's all part of the relaxed feel of the place."

And it's not just one-way traffic. Mr Fleming, who has installed signage suggesting patrons grab a drink next door while waiting for their burgers, is adamant his business has picked up since The Stanley opened.

"It's not just that his customers are coming to me or vice versa, but it's a more appealing place to come to generally," Mr Fleming says.

"There's more life around so people are more likely to come if there's a food place and a bar."

Mr Fowler values having his experienced friend guide him through the obstacles often encountered when opening a small bar.

"They had gone through the processes and Hamish and his wife, Siobhan, were a big help in pointing me in the right direction, offering me advice and support along the way," he says.

"Mind you, they had a dream run and that's how I thought it would be, and it just wasn't."

Mr Fowler almost gave up on the project after receiving an initial rejection from the Town of Cambridge following a handful of local residents' complaints about his plans.

Drawing on his legal background, he initiated proceedings in the State Administrative Tribunal to iron out the issues.

"Being under the auspices of a big law firm, where you've got all that support, to running your own small business ... was a big change but funnily enough, or ironically, a fairly easy decision," Mr Fowler says.

It was a decision made even easier after he worked behind the bar at the Norfolk in Fremantle for more than a year, on a volunteer basis initially.

While at the Norfolk he met Gerry Shields, a Northern Ireland native with extensive bar knowledge, who is now The Stanley's bar manager.

"Gerry brings his experience from The Quokka Arms and from the Norfolk and he's grown up around pubs, so it's invaluable," Mr Fowler says.